This weekend I attended the Broad Humor Film Festival as screenplay finalist. It was a fun-filled weekend, and, among many things, I:

1. Spent a total of 6 hours driving to and from Venice.

3. Met a lot of accomplished filmmakers and screenwriters.

4. Participated in a great screenwriting workshop with Julie Gray.

5. Got some invaluable insights into AFI’s Directing Workshop for Women.

6. Learned that we still need men to move heavy furniture.

8. At the screenwriters’ lab, I heard actors read my Jewish character as Latino and my Latino characters as New Jersey Italians.

9. Indirectly made a woman bawl on her husband’s shoulder. Then cry some more. Then bawl some more until she only had dirty looks left.

I will be elaborating on no. 4 for sure, and maybe on other stuff, later in the week. 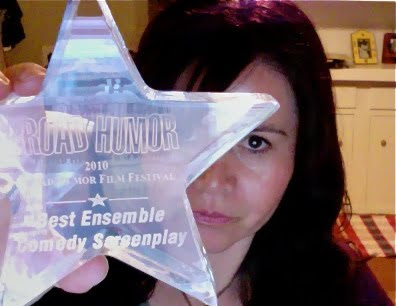 Posted by dizzydent at 4:50 PM