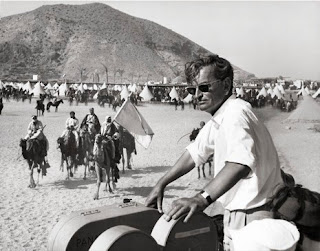 Remember that scene in Annie Hall?
Alvy Singer: [the man behind him in line is talking loudly] What I wouldn't give for a large sock with horse manure in it! Alvy Singer: [to audience] Whaddya do when you get stuck in a movie line with a guy like this behind you? Man in Theatre Line: Wait a minute, why can't I give my opinion? It's a free country! Alvy Singer: He can give it... do you have to give it so loud? I mean, aren't you ashamed to pontificate like that? And the funny part of it is, Marshall McLuhan, you don't know anything about Marshall McLuhan! Man in Theatre Line: Oh, really? Well, it just so happens I teach a class at Columbia called "TV, Media and Culture." So I think my insights into Mr. McLuhan, well, have a great deal of validity! Alvy Singer: Oh, do ya? Well, that's funny, because I happen to have Mr. McLuhan right here, so, so, yeah, just let me... [pulls McLuhan out from behind a nearby poster] Alvy Singer: come over here for a second... tell him! Marshall McLuhan: I heard what you were saying! You know nothing of my work! You mean my whole fallacy is wrong. How you got to teach a course in anything is totally amazing! Alvy Singer: Boy, if life were only like this!
Every time I encounter an IHFB I cringe and think of this scene. I’ve done my share of cinematic pontification and it wasn’t until I started to encounter several incarnations of Man in Theatre Line all over Los Angeles, that I decided to keep my brilliant analytical insights to myself for fear that I might sound like an annoying IHFB. Thinking it’d be less annoying than verbalizing my opinions, I started to write reviews for an e-zine. At first it worked. It was much easier to send a link to a review when someone asked what I thought about a movie. But then I started to annoy and bore myself with the written version of my gushing, passionate pontification and parading of my vast film knowledge. It was also truly traumatizing to have to pan some of my favorite directors (including Woody) in the name of journalistic integrity and to fend off angry and offended moviegoers because my tastes were not populist and differed from theirs. Tell someone you hated the beloved Haggis’ Crash and Slumdog Millionaire and you might find yourself the victim of mainstream ire.
Anyway, last Saturday I finally got to see Lawrence of Arabia on 70mm at the Aero with my Film Enthusiast group. Because it was one of my mom’s favorite movies, I have seen it at least a dozen times on television and video. While waiting for the film to start I told this to someone in the group, and a self-proclaimed IHFB (minus the “I” of course) said: Oh, I’ve seen it way more than that. And all on the big screen. I only see movies on the big screen. It’s the only way to see movies. On the big screen that is.”
Okey dokey. Tell him what he’s won Vanna…
A few people said they had not seen Lawrence of Arabia and I asked if they had seen The Bridge on the River Kwai. They said yes and before I could complete my thought the IHFB interrupted with “Oh no. But Lawrence of Arabia is much more factual.” I turned around and gave up on the conversation.  The IHFB continued to spill out tomes and tomes of David Lean and Lawrence of Arabia information and analysis hardly letting anyone else from the group chime in. I had to sit through 20 minutes of that before my friends, who were driving all the way from San Diego for this special screening, arrived. I decided right there and then to pretend I knew nothing about film. When asked my opinion, I'll just say I liked it, didn't like it, or it was okay. That was to be my gift to my fellow humans. And this is how one gets to learn the true meaning of empathy folks.
Ok, so this post was supposed to be about the incredible experience that is Lawrence of Arabia on the big screen. It made me sad that $500 million had to be spent to make blue lizards on 3-D to “restore the wonder” to the movie going experience, when all you have to do is spend $10 at your local revival/arthouse theater. Oh what the masses are missing!
I’m a filmmaker and therefore I have to sit through two and a half hours of blue lizards to see what’s up. I am not looking forward to it, but I will check my cynicism at the door and go in with an open mind. In the meantime, I have to ask:
Would David Lean have used CGI instead of spending two years in the desert if the technology had been available to him?
Posted by dizzydent at 6:52 PM No comments: