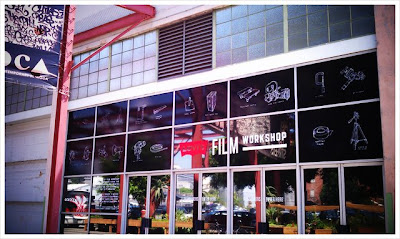 I wish I could have been more productive this past weekend because I still have a lot to do in preparation for the shoot this Saturday. I had no idea transferring five rolls of super 8 film to digital would take five hours of my day. It was free, yes, but sometimes it’s better to pay than have to wait for little ole ladies that got there before you to transfer their home movies from 1965. It wasn’t all bad though. I read a whole book (How to Heal the Hurt by Hating) and I got to chat with Moy, the Levi’s Film Workshop volunteer filmmaker that was helping us with the transfer.


I’m always a bit stunned when I come across genuine, passionate people who love to serve and share their knowledge. Moy is a film enthusiast and cinematography student at a college in Los Angeles. We started to chat about the film labs around town and when I complained about Pro8’s shitty customer service he was shocked. He has been dealing with them and the other labs for a long time and told me they give him great rates. That’s when he told me he teaches cinematography workshops on the weekends for free. He believes knowledge should be shared generously and free of charge. (And so do I. This is why I have this blog that no one reads.) He also showed me some of his films on his iPhone. One of them was what he called “anamorphic super 8.” He has been experimenting with anamorphic adapters on super 8 cameras. WHAT? My jaw dropped and my mouth watered with anamorphic super 8 envy.

When I got home I was too mentally exhausted to go prop hunting so I decided to work on the art work for the location.  But not before procrastinating by preparing the slate. 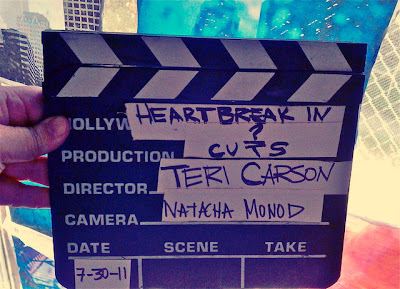 Later that evening I got up the courage to ask San Diego-based musician Nena Anderson for permission to use one of the songs from her latest album. This is always a tricky endeavor because event though you wouldn’t know it from looking at me, I’m pretty shy. It worked really well when I propositioned the Truckee Brothers and I was hoping Nena would say yes. I had already played the song over and over and visualized it along with the film’s images and credits and I was pretty married to the idea.

I’m a firm believer in using original songs and music from indie musicians and composers. Why use a copyrighted song you’re never going to get the rights for anyway instead of giving talented people a chance to showcase their work? It’s pretty tacky and lazy.

This is the email I sent to Nena:


As you know, I love your new album and my favorite song is Daggers. It came into my life at the right time: heartbreak. Ha ha ha.


Anyway, I'm shooting a short film next Saturday. It's a comedy called "Heartbreak in __ Cuts." The blank refers to the number of cuts in the editing, so I won't know until the film is finished. It's about a freshly-dumped girl dealing with a broken heart in one day. I think Daggers would be perfect and I would love it if you'd let me use it with film festival rights.


The film is already slated to screen at the Broad Humor Film Festival in Venice and at a curated film exhibition at the Museum of Contemporary Art in San Diego in La Jolla in August. And I plan on submitting to Sundance and other comedy and shorts film festivals.


I hope you're having a nice weekend and to hear from you soon.

Within half an hour, she replied yes and asked me to send over a release. I jumped from my seat elated and of course Pepa got up instantly and we danced and danced across the wooden floor.


Listen to "Daggers" and the whole Beyond the Lights album HERE 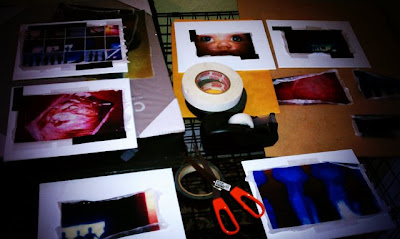 So things are coming along pretty nicely and I can’t help but being paranoid. What will go wrong? Other than being dumped by my boyfriend who was supposed to produce the film that is.

P.S. If he were not dead, today would be Stanley’s birthday.

A film is - or should be - more like music than like fiction. It should be a progression of moods and feelings. The theme, what's behind the emotion, the meaning, all that comes later. -- Stanley Kubrick