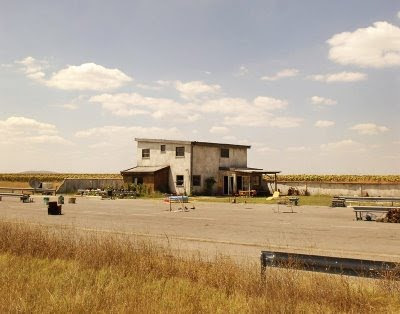 ﻿There is no art without ambition—ambition in the means an artist has at her disposal, in her desire to try new things, in the way she questions film language and how she will express her unique point of view.  As a testament to this ambition, Swiss-French director Ursula Meier has put in Home everything filmmakers tend to avoid in a feature debut: a well-known cast, sets to build, cars, children, and animals.  Unique and unsettling, Home is a contemporary and enticing tale of spiraling humor and darkness; an environmental "horror" movie on par with Todd Hayne's Safe (1995), where a happy home is transformed into a nightmare due to extreme environmental influences. 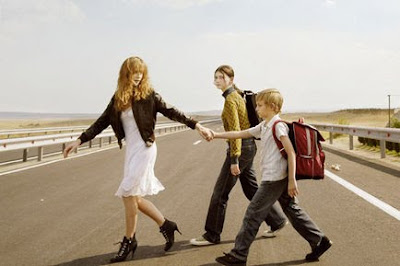 Marthe (Isabelle Huppert) is a middle-aged mother and wife enjoying living and frolicking about with her husband Michel (Olivier Gourmet) and their three children in the remote French countryside. Their eldest daughter Judith (Adélaïde Leroux) is a pouty, sultry teenager, the middle daughter Marion (Madeleine Budd) is awkward, bookish and reserved and their youngest son Julien (Kacey Mottet Klein) is an energetic rascal. Meier begins by delighting in this warm, loving unit, their quirky antics and the genuine familial affection between them, opening with a nighttime family game of street hockey and a bathing session that turns into a splash fight which establishes the anarchic playfulness of the interactions of this hermitic clan. When the abandoned highway adjacent to their house is suddenly completed and reopened, change is forced upon the family, their peaceful existence drowned out by the continuous noise of the traffic, day and night. At first, the family adapts to the changes, resorting to increasingly lunatic measures to block out the noise and providing for some comedic moments and striking visuals. 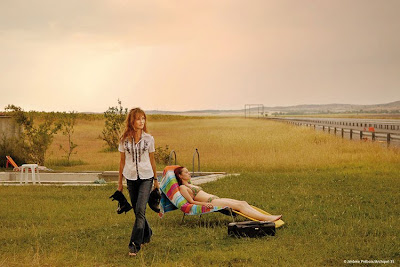 With cinematographer Agnès Godard's help, Meier effectively communicates the sense of upended privacy, moving easily from the nighttime intrusion of construction workers dressed in eye-straining orange and yellow uniforms registering as a truly alien presence to the clashing sight of Marthe tending to her garden as blurry streaks of traffic zoom by. Michel, Marion and Julien cope with getting home from work and school on the other side of the road while Judith resolutely continues to sun her bikini-clad body, despite howls from the passing truckers. Nevertheless, they refuse to leave and things start to go downhill when the indifferent Judith disappears, Marion turns into an eco-paranoid basket case, Marthe completely looses it, and Michel cracks under pressure from trying to hold the family together and do right by them. Lost in the middle is Julien. Eventually, paranoia and open hostility develop as a too-close family is forced into even closer proximity. 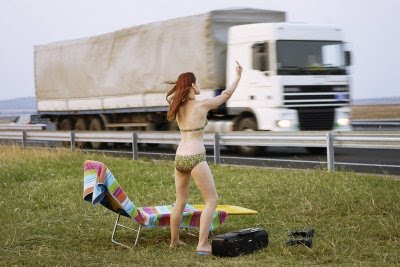 Gradually the comedy and sunlight diminishes as Meier subjects the family to the tensions of self-imposed isolation and segues from family drama to psycho-drama as life as the family knew it is eroded and they approach meltdown. Huppert's presence once again adds weight and portent to a darkly comic fable, and she avoids dominating the ensemble with another brilliantly modulated performance. As always, it only takes a close up of French cinema's most beloved psychopath to know something very dark is looming. After all, she has sat in a bathtub cutting her genitals with a razor blade; she has held her son in her arms while he masturbates, she has slaughtered a whole family with a shotgun, and she has wielded a power-drill while dressed from head to toe in black PVC in other films. But Meier's script is ambiguous and her direction confident and the darkness revolving around Marthe and the family's past is only hinted at, never explicitly outed. Meier uses this, and the family's previous idiosyncratic idyll, to help explain their increasingly desperate actions, but is never straightforward or heavy-handed or offers an easy illustration. Instead, she mixes tones and genres, jumping from a dramatic scene to another one and unfolds events to their logical and then increasingly twisted and dangerous ends, pushing the story into grim metaphor. Godard starts with a hand-held camera and finishes with still shots, with only movement in the last shot, seen from the road perspective. We therefore go back to the starting point of Home: from a car. Home is a road movie in reverse. 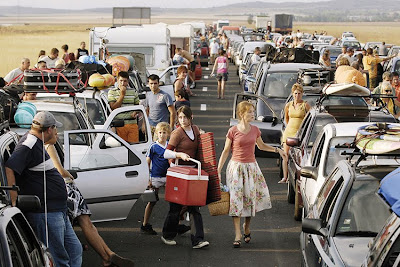 The film is heavily metaphorical so as the events get more and more absurd and harrowing it helps to remember that however timely the environmental themes and raw the emotions of Home are, the film is ultimately a surrealist fable about isolation turning into madness. There are strong intimate ties between the characters that are revealed by the highway, which becomes the screen onto which each of the characters projects their own neuroses. The highway is also a mirror of the world - violent, aggressive, and polluted - which enters the homes of people who thought they would be able to live apart from society. As well as disruption, danger, pollution and intrusion, the highway represents isolation in the face of progress, individualism against authority and monolithic change and the sacrifice of a way of life to modernity. Taiwanese director Tsai Ming-liang once said "When we are in an extreme tragic situation, there is no escape, we are trapped. And that's when we manage to set ourselves free, that's when we find the strength to react." At the film's conclusion, the humdrum passing glances at the house will seem familiar to many and truly underline these themes; the characters have become animals fighting to hold on to the one thing that they have left - shelter - as development and environmental decay completely engulfs them.