This year, as a screenwriter and also as a film critic,  I have learned to take the audience into consideration and even respect it. And believe me, for a born and raised film snob and idiosyncratic filmmaker, it was a long and painful process.  I think Billy Wilder expressed it best:

"An audience is never wrong. An individual member of it may be an imbecile, but a thousand imbeciles together in the dark - that is critical genius."


In the documentary Billy Wilder Speaks, Volker Schlondorff asked Wilder what should be in a screenplay. He responded: "Interior. Exterior. Day. Night. That's it."

It's advice I have taken to heart and which has enabled me to demystify the craft of screenwriting and realize the supremacy of the Story. Sitting through readings of over-written screenplays has helped a lot too. Don't do unto others...

Wilder's screenwriting advice below reflects his respect for the audience and his approach to filmmaking. It's great advice from a filmmaker that gave us one of the most articulate, enjoyable and influential body of work in the history of cinema.

1. The audience is fickle.

3. Develop a clean line of action for your leading character.

4. Know where you're going.

5. The more subtle and elegant you are in hiding your plot points, the better you are as a writer.

6. If you have a problem with the third act, the real problem is in the first act.

7. A tip from Lubitsch: Let the audience add up two plus two. They'll love you forever.

8. In doing voice-overs, be careful not to describe what the audience already sees. Add to what they are seeing. 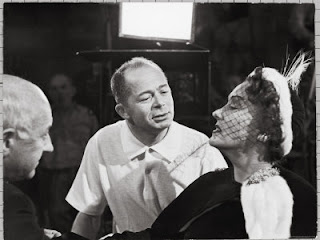 10. The third act must build, build, build in tempo and action until the last event, and then

Seems so blinking simple when you read the advice

These rules may make it look simple, but I think they take a lot of effort to make work.