I went out to shoot super 8 footage around my Los Angeles this weekend. First, I stopped to get a car wash, because frankly, it’s embarrassing when your car is crunchier than a granola bar. While I was shooting the workers at the car wash an angry Mexican man ran after me flinging his arms and shaking his head. “You can’t photography in car wash!” I gave him my best “the hell I can’t look” but he continued to yell at me.

I switched to Spanish to appeal to our shared Mexican heritage. “But I’m an artist. This is for the museum. Museum. You know the museum? No one is going to see it. Don’t worry about La Migra."

He replied, in English, “No. No. No photography the car wash.”

I wanted to tell him that this was precisely the reason why I was making this film. To give him and his oppressed brethren a face and a voice of some sort. But I didn’t and I sat down in the waiting area. It didn’t take long before the parade of brown, sweaty and exhausted faces rubbing cars with dirty red rags flared up my itch to continue shooting. The hell with it. I can deal with getting yelled at again. So I started to shoot intermittently while the man that chastised me came and went. It was difficult to keep it on the down low because a toddler was fascinated with my camera and kept trying to grab it. His mother did nothing about it even after I told her I didn’t like kids. A few minutes later their car was ready and they left. I continued to shoot, trying to zoom in the faces. Then a girl and her father sat down next to me and at hearing the camera’s motor running the little girl stood up and planted herself in front of me totally invading my personal space. Her father asked me, “Film?”

Yes, FILM. FILM. And can you get your daughter away from me and my camera please? Thank you.

Note: A week ago I could have grinned and put up with these kids’ affronts. If I appear too direct is because it seems I caught some strange bug that doesn’t allow me to put up with any more bullshit. I have no idea how long it will last but so far it’s working for me.

“FILM!” Then I saw the worker’s arm go up and wave the rag. My car was ready. I gave him a tip and headed for MacArthur Park. I’ve driven by MacArthur Park many times on my way home from work and the closest I ever get on foot is when going to Langer’s Deli for the Number 19, which is not often. Thinking about a perfect pastrami sandwich, I've seen a multitude of tired, poor people come and go from one end of the street to the other. I saw but I didn’t really see.

I parked, loaded the camera and got out of the car. I looked around and then photographed a continuous 360 degree shot. Then I heard a voice ask, “Film?” I lowered my camera and saw a man whiz by me, still asking, “Film?”

I felt intimidated and completely out of my element. Was I there to be exploitative for the sake of my art? Recently I was called, among other expletives, a “bitch snob” by the man I loved and I’m feeling wounded, insecure and vulnerable. These emotions can destroy a filmmaker’s courage. I tried to zoom in the people’s faces, first with my eyes. I had to be sure of myself before I could intrude with my camera. What right did I have? This film wasn’t really about them. It was about me. A self-portrait in a particular place and time. I was there to see with my lens, not my eyes, and to try to make sense of my life. I had lied to the angry man at the car wash. The oppressed my ass.

“The message is not in the code. The code is the message,” I thought.

I walked around, shooting, zooming, changing the frame rate, dodging angry homeless, ignoring men’s hissing advances, hoping the birds wouldn’t shit on my head, feeling sorry for those people, for me, for everyone. We’re all thrown in together in this cruel city, but we couldn’t be more far apart.

Still, even though I feel alone with my minced heart, I’m still so lucky for so many reasons. I’ve been alone and then I wasn’t and now I’m alone again. But being alone again is different now. Something has changed. Before, reality seemed inaccessible to me. Something was denying me the true perception of reality. This was it. My fear of the future demanded that I change the images of the past and present.

Then, another guy walked by and asked, “film?” 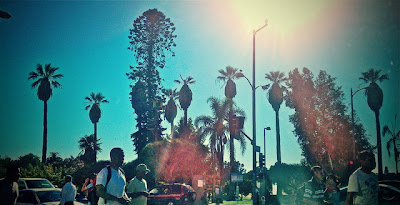 Posted by dizzydent at 3:29 PM