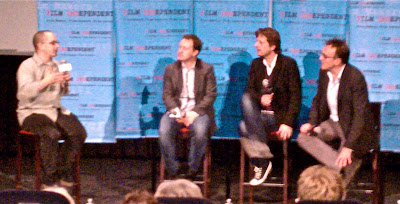 Lately, I’m really apprehensive about writing about mainstream movies because I’m sick of being accused of not liking anything. Well, okay who am I kidding, I hardly ever watch mainstream movies. But when I do, it’s for a very good reason.


A few weeks ago I decided to go to a preview screening of 127 Hours only because 1) the hoopla surrounding the trailer (yes, the trailer); and 2) wanted to see for myself if Danny Boyle would redeem himself. I understand that he wanted an Oscar and that’s why he made the over-baked and lobotomized fantasy Slumdog Millionaire. He got his Oscar and I expected he would go back to his unsentimental, stylish and entertaining self. Back to his Shallow Grave self.

You’ve probably heard about it. 127 Hours is the movie about Aron Ralston, the guy who cut his own arm off. Unfortunately, it's also about courage and adventure, about taking stock and embracing life. It's about a personal journey and coming face to face: with your worst fears, your greatest strength, yourself in all your flawed reality. (I guess fantasy is Boyle’s new genre of choice.) I just wanted to see a gory, entertaining movie.

Blatantly noncommercial elements aside, Boyle and co-writer Simon Beaufoy have managed to craft quite an accessible film, opening up the action with a sexy prologue featuring two lost hikers. And that’s the problem. It’s a mostly-boring, corny Hollywood movie for an optimistic American audience. It also makes a good case for staying indoors. That .00001% desire I had to go camping is completely gone now.

Boyle injects his hip, techno, eye-popping style into a story that should have been slow and quiet. I kept on thinking it should have been directed by an artist along the lines of Werner Herzog or Gus van Sant. The first act is just like the trailer; a music video that is meant to wake us up and get us interested because then it’s basically one guy trapped under a boulder for over one hour having hallucinations in the form of flashbacks. A whole lot of mediocre foreplay to get to the good part, which wasn’t that gory after all. (Miike’s Audition has set the gore standard for me.) Marketing “rumors” have it that people have fainted during the arm removal sequence. Is it a spoiler if I tell you it’s just hype? Yes? Too late. 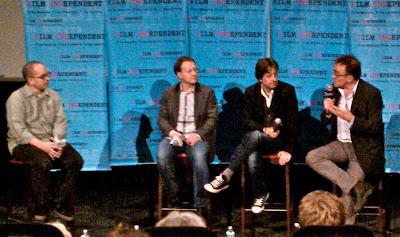 There was a Q & A after the screening that was a lot more interesting than the movie itself. Beaufoy said that they didn’t want to make just a survival story. That 127 Hours was ultimately about regrets, second thoughts, layers of the past that everyone could relate to. A Man vs. Himself rather than Man vs. Nature. (Yawn.) It was a difficult script to write because, as writers, they had very few tools. Boyle added that they had to come up with many different ways of keeping the momentum going forward. Yes, that’s explains the frantic editing, bright colored triptychs and catchy song that make no sense whatsoever.

They approached Ralston in 2006. It took them almost four years to convince him to give them rights to the story because Ralston was adamant his story should be a documentary like Touching the Void. He was afraid that the studios would give a note like “Does he really have to cut off his arm?” Because of Slumdog’s success, the studio cut Boyle a lot of slack and basically let him do 127 Hours instead of Slumdog Billionaire. Boyle joked that he put in a dance sequence to appease the executives. (James Franco does a little jig on top a rock.) Beaufoy could not fathom how they could pull it off, but Boyle knew how from the very beginning.

The best and most compelling sequences in the film recreate the videos Ralston shot for his family since he was convinced he was going to die. He had a video camera and he recorded himself throughout his ordeal. Ralston shared the videos with Boyle even though he had promised his mother he’d never show them to anyone outside the family and allowed him to include them in the narrative. Boyle said that with the exception of one particular sequence, he kept the video footage the same. In case you’re wondering, Boyle said the crowd triptychs are an effort to convey, not what separates us, but what connects us. They represent the people Ralston ran away from. That’s such bull shit. Boyle just loves the split screen.

That’s enough of this. I’ve been trying to write about 127 Hours for weeks but I kept on boring myself with the subject matter. I’ll say this though: Boyle seems pretty addicted to having a wide audience. I seriously doubt he’ll go back to making good films. Unless he makes up with John Hodges.
Posted by dizzydent at 11:34 AM