He Always Gets in the Way

I wish I could climb inside my head and give my brain a few slaps once in a while. It really pisses me off that, let's call it a He, He is trying to sabotage me. There is a reason why patterns of behavior repeat themselves. It is your brain trying to fuck you up and He is very successful. Don't get me wrong. I have become very attached to my brain and I really love Him a lot, but He can be a son-of-a-bitch sometimes. He is always reminding me of His superior quality and why I should always pay attention to Him and that He is always right. For some time now, I have suspected that He is not always right. I know He is trying to protect me, but does He really know what is best for me in all situations? He thinks He is, but now I think I know better. I hope one day to be stronger than He so that I can jump without thinking.

I know. This entry doesn't make sense. It is because I am not paying attention to Him.

"Americans" (to clarify: specifically the ones that reside in one of the 50 states currently known as the United States of America) are very naïve. They don't want to see the involvement of the United States in destruction and torture over the years. The United States likes to see itself with a halo on its head, and whenever a revelation like Abu Ghraib or My Lai and now Fallujah surfaces, U.S. citizens tend to shrug it off as an anomaly. When you look at the last fifty years of U.S. history, it is anything but. From Greece to Iran to Indonesia to Vietnam and throughout Latin America, the U.S. government has been complicit in the torture or murder of hundreds of thousands of people.

Memory is a prerequisite for morality. Americans lack memory, they are amnesiacs. The writer Ariel Dorfman calls such historical amnesia a "false innocence." It is entirely functional to the sort of empire that the United States has become. It is true that the media does not serve up enough analysis and information to allow people here to judge what is happening. But it is also true that too many people are willingly blinding themselves to truths that are looking them in the face. They are too busy watching reality television and Desperate Housewives. Violence is an integral part of being an empire. We are the beneficiaries of an empire, and the empire rests on a number of props that we don't care to look at. Torture and violence has been and will continue to be, one of the main tools.

If "Americans" (again: specifically the ones that reside in one of the 50 states currently known as the United States of America) were to truly acknowledge what is being done in their name, they would have to change the way they live and remember, work and play. Or give up seeing themselves as ethical. Do you see that happening?

Posted by dizzydent at 8:46 AM No comments:

The Objects of Detachment

Years ago I decided to simplify my life and get rid of all my junk. I went through my things and tossed anything I could not justify keeping. It took a while, but by the time I was finished, I had gotten rid of every single shoe box, piece of trendy clothing, magazine, greeting card, etcetera, I had kept for years. In order to avoid such a tremendous project in the future, I made it my practice to throw away things I didn't need as soon as I could. It wasn't hard getting used to detachment. This detachment of things perhaps led to detachment of people--a certain hard-earned independence and strength to endure heartache of any kind.

My grandmother used to write me short, little notes. These notes were an indirect reminder that it was about time I sent her some money, but she always threw in a wise, loving message that would make me feel things were going to be just fine. I was more than happy to pay in exchange for her comforting words. The last note she wrote to me and the only one I kept, I carry with me in my wallet. It reads (in Spanish):

"God willing, you will be content and happy and I wish you the best. I can't see very well any more, but I will see when I can see you. Your Nana"

The day after my mother passed away, I went to my sister's house. I noticed she had set up photographs of our mother and lit candles by the fireplace . There were some greeting cards, which I assumed were sympathy cards from her friends. On closer inspection, I discovered that not all the cards were sympathy cards. Some were birthday cards our mother had given to her. My mother's sweet and loving written words induced a pain of loss I had never felt before, but then, extreme envy took over. I tried to recall if I still had birthday cards from my mother. I rushed home and searched every corner of my apartment, looking for one, just one. I am still looking. There has to be one somewhere.

Posted by dizzydent at 3:08 PM No comments: 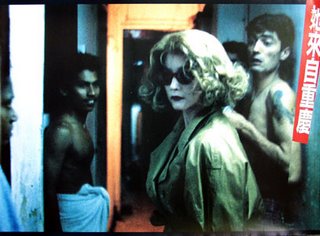 1. The Madison dance sequence on Band of Outsiders

3. Once Upon a Time in the West: Frank's gang kills the McBain family.

5. Chungking Express: At the end, when Faye Wong comes back to Tony. Can't get more romantic than that. California dreaming...
Posted by dizzydent at 10:30 PM 1 comment:

Everything is better when you are hungry. Starving. Art. So easy. Stroll the streets of Paris. And you are there. Just get there. Easy. Forget about the pain in your gut. The burning and the windows of Fauchon,
Posted by dizzydent at 3:05 PM No comments: