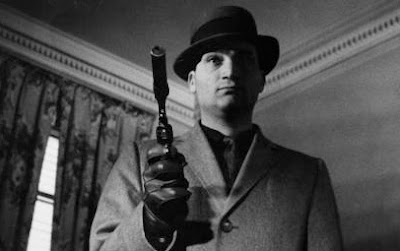 From the studio’s point of view, it’s easy to see why Blast of Silence was not a priority at the time of its release.  It was a cheap distribution pick-up that must have seemed downright perverse to studio executives given that its protagonist wasn't played by anyone well-known from either film or television, but by its writer-director, a 26 year old non-actor. But Blast of Silence was a fast, cheap thriller with enough violence and gunplay--elements that could always make a couple of bucks for a studio if the budget was right.  In my perfect movie world, Allen Baron’s prodigious directorial debut should have put him on the auteur map. Instead, he went on to direct episodes of Dukes of Hazard, Charlie’s Angels and The Love Boat.  Blast of Silence was dumped into a handful of theaters in April 1961, quickly vanished into obscurity, and was almost impossible to see for years, known only by reputation until a small revival in the nineties.
Blast of Silence is a model thriller and character study that takes us step by step through a killer’s process in setting up his prey for the eventual kill. At every turn, Baron’s direction remains assured and proficient, with few if any missteps.  The framing and editing have an experimental edge and Baron comes up with some incredibly brutal set pieces pushing the boundaries of noir to grim extremes. It's difficult to think of another film from that era that's so stark, sleek and antisocial since that type of attitude didn't become fashionable until the late 1960s. 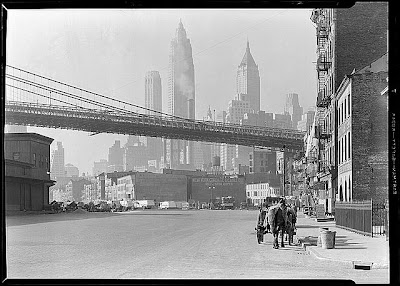 The production, shot on the streets of New York in black and white with a minimal crew, embraces its limitations, forgoing realism for an alienated atmosphere.  Blast of Silence goes further than any previous noir in eschewing a lumbering chiaroscuro in favor of a naturalism closer to a down-and-dirty, semi-documentary aesthetic (more Cassavetes than Alton) which showcases studiously gray and unglamorous views of 1961 Manhattan. It’s a great New York film and Baron strikes gold in the many locations around the city, from the Staten Island Ferry and Harlem, to various rooftops and vintage storefronts and nightclubs. The locations feel authentic and unaltered: one look at the realistic rathole apartments tells you that these filmmakers are all-too-familiar with their territory.   It's impressive how artfully Baron presents these shots, given the shoot-and-run-without-permits circumstances of the production. 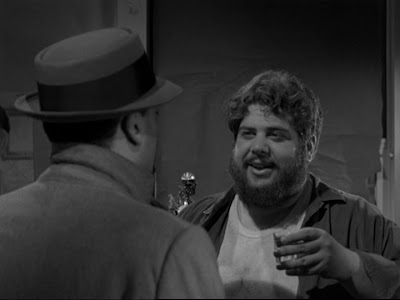 Baron stars as Frankie Bono, a hitman loner who visits Manhattan over the Christmas holiday to kill "a second string syndicate boss with too much ambition...and a mustache to hide the fact he has lips like a woman."  This high-pulp voice-over is provided by a gravelly-voiced, blacklisted and uncredited Lionel Stander.  He speaks in tones that are sneering, condescending, cruel, and mean-spirited, but somehow very wise and even a little sympathetic.  The voice-over provides a brutally poetic touch to the entire film, frequently turning up to address the audience and the film's often silent protagonist.  After buying a hot .38 from a crazy slob named Fat Ralphie, the tightlipped Bono has 24 hours to chill out and, as Stander tells him, "lose yourself in the Christmas spirit with the rest of the suckers." He runs into an old associate from the orphanage where he grew up, meets the guy's sister, and lowers his guard enough to go to a party with them. Still, Bono only knows how to treat this nice girl like a piece of meat, with the ever-sociable Stander advising, "If you want a woman, buy one. In the dark, so she won't remember your face." 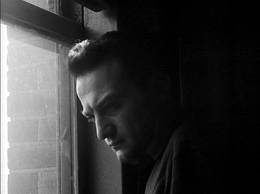 Some cite Baron’s performance as the film’s one weakness, but since Bono is such a expressionless, humorless cipher, it's difficult to tell if Baron can act.  His stiffness and unease in front of the camera actually serves the character, who seems to be struggling valiantly to hide his weaknesses. As played by Baron, the expected noir antihero without a sense of humor becomes a sympathetic tragic figure.
This film is a twilit, deathward emanation of everything that had underlain the noir form from its beginnings. Baron ignored the rules and brought forth a dissociated, ugly vision of his fellow man that, unlike its closest spiritual predecessors in noir, never resorts to either grotesquerie or easy symbology. The loneliness, doom and spiritual unease that operated at noir’s core which became more pronounced as the form slowly began shedding its visual trappings in the 1950s, here become its dominant emotional surface, infecting everything, consuming every character in the film rather than simply its protagonist. No American film before it, made in Hollywood or anywhere else, had trafficked so promiscuously in unadulterated nihilism, or so used the condition of constant, irritated Hate as its emotional motif. As far as this film is concerned, chronic nihilism and despair aren’t debilitating conditions at all. They’re so conducive to success that they become positively therapeutic.  Try selling that to the Friday Night at the Movies crowd.