They come in fours.

It’s not true what they say that deaths come in threes. Obviously they come in fours.


First one of my heroes, Howard Zinn, then that lady the played the ghostbuster in Poltergeist, J.D. Salinger and now…Miramax. 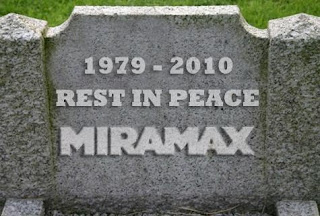 Posted by dizzydent at 10:37 AM No comments:

I just realized Film Independent’s yearly Directors Close-up series starts next week. I went last year, and with the exception of the directing actors session with Rodrigo Garcia, it was a disappointing experience. Mostly because the panels were moderated by Mary Sweeney who was a total bore. You would have never guessed she was a filmmaker that has worked with David Lynch (according to IMDB, they were also married) from the pedestrian and uninspired questions she asked.

This year the moderation promises to be livelier. John August is passionate and committed to sharing his knowledge on the craft with other filmmakers and screenwriters. I’ve attended one of his panels at the WGA and he did not disappoint. The other moderator is Neil LaBute. And lucky me, he’ll be moderating the Writing and Directing Comedy session. I will sit up front, raise my hand, and wave it frantically until I get called on. I could not care less about his alleged misogyny. Nope. I will ask him what it was like to direct Nic Cage in one of my favorite comedies ever: his remake of The Wicker Man. Was the bear suit Nic’s or his idea? Was the line “Not the bees!” improvised or on his script? I know you’re thinking that’s rude. But I just need to know, what the fuck was up with that? Was it really UF (unintentionally funny) or is LaBute a modern day Douglas Sirk?

If you have not seen it, you must. I haven't seen the original, which is generally regarded as a good movie, so I'm tempted to sink the original to the bottom of Whoops! Ocean anyway, because obviously it resulted in the remake, but the parents can't be blamed for the sins of the child. Or at least that's what parents of shitty children are always telling everybody. There are many details of the movie that are hilarious. Such as the website Cage uses instead of Google to get directions. Or the part where he gets locked in a cistern and is probably going to drown, but just before his impending doom, he manages to fall asleep and have a nightmare. Or the part where he's a cop but he doesn't follow any normal legal courses of action that a cop would follow when a child has been reported missing. Or that he wears a jacket and tie throughout the whole ordeal only to change into a bear suit in the end. Or everything about this movie. This may be a horrible movie but it has more laughs than any intentional comedy these days. How can you not love the mysterious Summers Isle, which is populated almost entirely by Kathy Bates or Cage sidekicking a teenage girl into a wall and punching others in the face, or Mother Goddess Ellen Burstyn, face painted like an NFL fan, leading neutered male servants in a costumed fertility parade, or little schoolgirls chanting "Phallic symbol! Phallic symbol!" or Cage pointing a gun at a woman and threatening her with "Step away from the bike!" I'm convinced LaBute lost the thread of his original ideas, and, by page 15, decided to write a comedy by flailing out blindly hoping to accidentally reverse the tide of progress with a casual, intellectually misplaced beeyatch slap.


Here are some highlights of this almost-cult classic:

Will I have guts to risk getting myself escorted out of the theater, possibly even getting banned from Film Independent? Stay tuned.

P.S. If you think that directors just point the camera at Cage and let him go to town with his role, read the following gem and think again:

Cage: “So many directors are so arrogant. For example, Klaus Kinski -- who Werner Herzog has a legacy with -- he was very frustrated with the arrogance. We always hear Werner's side of the story about "Klaus was this and Klaus was that" but you never get to hear Klaus' side of the story. I was doing a scene (on Bad Lieutenant) -- it was in my second day of shooting -- and we all know the imagination and preparation (required) to think I was on cocaine (for the character). There was a little bottle of baby powder, and I'm snorting that. I'm psyching up, I'm psyching up, and he comes up and says (in German accent), "Now Nicolas, what is in that vial?" And I was like, "Are you kidding me? After four hours of this you're gonna actually ask me that? Take me out of my preparation? You would think the director would understand the actor's process and give us the space and the room to do what it is we need to do.”

This is hilarious on many levels, especially if you are familiar with Herzog. And why is it that it's impossible not to hear Herzog's lethargic Bavarian-accented voice every time he is quoted on print?
Posted by dizzydent at 1:25 PM No comments:

I can relate. Sometimes I sound like John Kerry when someone asks me what my movie/script is about. Hilarious and harsh, but a good lesson nevertheless. 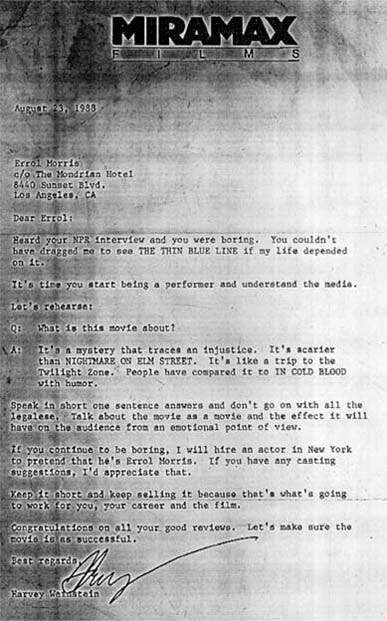 Heard your NPR interview and you were boring. You couldn't have dragged me to see THE THIN BLUE LINE if my life depended on it.

It's time you start being a performer and understand the media.

Q: What is this movie about?

A: It's a mystery that traces an injustice. It's scarier than NIGHTMARE ON ELM STREET. It's like a trip to the Twilight Zone. People have compared it to IN COLD BLOOD with humor.

Speak in short one sentence answers and don't go on with all the legalese. Talk about the movie as a movie and the effect it will have on the audience from an emotional point of view.

If you continue to be boring, I will hire an actor in New York to pretend that he's Errol Morris. If you have any casting suggestions, I'd appreciate that.

Keep it short and keep selling it because that's what's going to work for you, your career and the film.

Congratulations on all your good reviews. Let's make sure the movie is as successful.

Harvey Weinstein
Posted by dizzydent at 9:19 AM No comments:

What makes a great opening sequence is a personal thing, of course, but when a movie grabs your attention from the opening frame, knocks you out of your seat or even grinds you into it, you tend to remember it very fondly.


There are the obvious choices: 2001: A Space Odyssey, Raiders of the Lost Ark and Apocalypse Now. And the ones where the movie did not live up to the opening, like Saving Private Ryan.


And then there are those announce that the movie you're about to see is going to be something really special.


The list below is not meant to be definitive or exhaustive, just an example of a few of my favorites.

The perfect cinema metaphor, the king of allegorical opening sequences.

Once Upon a Time in the West


The Battle of Algiers

In a scant 2:30 minutes, Pontecorvo sets up the story. Without showing any violence, we know what the prisoner has gone through.

Touch of Evil
Unquestionably one of the most marvelous, intoxicating openings in cinema history.

Turn to the right!

Who needs reasons when you've got heroin?

There Will Be Blood


PT Anderson knows how to open a film.
(no clip available)
Posted by dizzydent at 8:31 PM No comments: