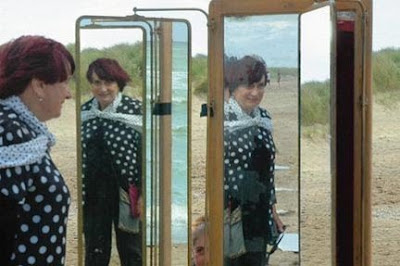 The tool of every self-portrait is the mirror. First you see yourself in it, then you turn the other way and you see the world. After creating an eye-popping installation of mirrors on a beach, Agnès Varda remarks that "Imagining oneself as a child is like running backwards. Imagining oneself ancient is funny like a dirty joke," and proceeds to walk backwards (literally) into her past without a single misstep, using the beach as a starting point for her memories and reveries. The Beaches of Agnès is the fetching and haunting story of a filmmaker seen through the eyes of a filmmaker. 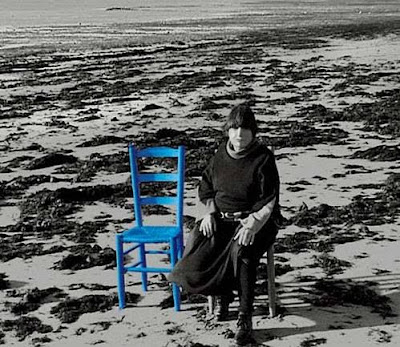 Varda's travels prove linear but digressive: she returns to her childhood (which initiates memories of the Nazi occupation and hence her own short film about the French military rounding up Jewish children); visits the home of her youth in Brussels just as it’s about to be sold; and goes back to the Mediterranean coastal town of Sète where she spent her summers. Varda, 81, has retained all the vigor, humor, curiosity, intelligence and sheer cinematic inventiveness that have marked her films since 1954's seminal precursor to The French New Wave La Pointe Courte, which she made on a shoestring budget at the age of 25 when most of the French New Wave directors were still dreaming of cinema rather than making it. She had not attended film school and was hardly a film buff, but armed with only her imagination, she took the plunge. Spanning half a century, Varda's career includes the landmark real-time drama Cléo from 5 to 7 (1962), Le Bonheur (1965), a stylized melodrama concerning the unintended fallout from adultery; Vagabond (1985), starring Sandrine Bonnaire as a homeless free spirit, which won the Golden Lion at the Venice Film and The Gleaners and I (2000) a nonfiction ramble through the world of everyday treasure hunting. 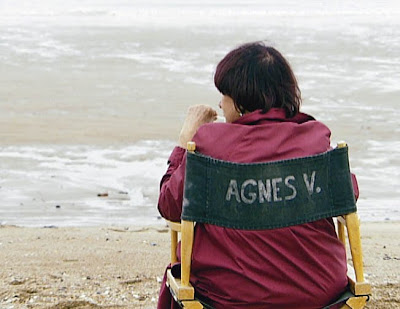 Although there's an elegiac undercurrent to Beaches, it's more of a personal essay in memory than a confessional memoir where the tone sustains an unusual blend of gravity, humor and playfulness. As Varda continues to thread clips and anecdotes about her work throughout, it becomes clear that she is ensuring that she’s properly memorialized. Beaches is a visual burlesque of the serendipitous and unsettling collision between the found and the made. Varda skillfully intercuts photographs and archival footage with clips from her films and whimsical reenactments. Revealing a life inextricably mixed with art through an ingenious juxtaposition of images and wordplay, Beaches is a fascinating document of imagination at work, of fact morphing into fiction. Full of self-deprecating wit, wisdom and whimsy, the film reveals her transition from photographer to filmmaker; her stark early working conditions; her travels to Cuba and China as a photojournalist; and, later, to Los Angeles with her husband and director Jacques Demy. She treats the film as an opportunity for playful wish fulfillment as well as for analyzing her life and filmic experiences. Varda fills the frame with unexpected and often glorious images capturing various journeys, projects and relationships, but it's not really an archival exhibition. Rather, it's a chest of wonders, full of whimsical inventions as well as recovered artifacts and dreamy montages, re-enactments and surrealist set pieces, such as building a beach in a Paris street and placing the staff of her production company outside at their desks wearing bathing suits. 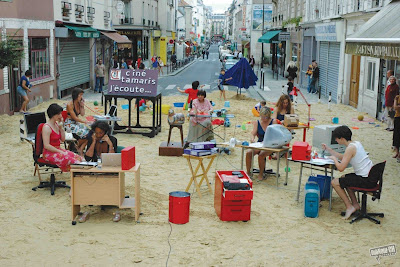 Loss of memory is one of the subtexts running throughout Beaches and Varda doesn’t want us to piece together the narrative of her life; she’s more than happy to hold our hands and take us with her on her journey into the past. Though discursive in its approach, constantly branching off to unexpected detours, there's an emotional fluidity as she merges and breaks chronological sequences, providing several points of entrance to her explicit and direct reminiscences. Several of her friends and collaborators make guest appearances, including the camera-shy Chris Marker, albeit only in the image and voice of his eternal avatar, cartoon kitty Guillaume-en-Egypt, here life-sized and preciously eye-rolling while asking Varda satirically canned interview questions like “Were you a film buff?” and “May ’68 in France, ring any bells”? and Harrison Ford who tells the anecdote of how he was told repeatedly that he had no future as actor. 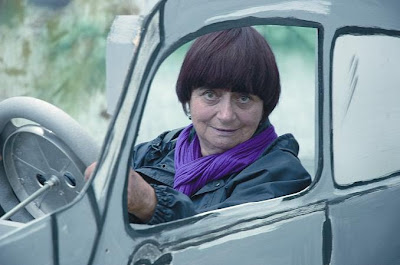 The warm, intimate relationship Varda shared with Demy permeates the latter part of the film, imparting a bittersweet, poignant quality; as she walks backwards on the Santa Monica pier, she expresses that "Memories are like flies swarming around me and I'm not sure I want to remember." However, Varda is without doubt the strong-willed but gentle protagonist of her own story. She figures in almost every scene, sometimes dressed as a potato or driving a cardboard cutout car, but wherever she is, her eager, inquisitive face searches out other people’s thoughts and whatever information the specific surroundings have to offer.

Beaches is a cinematic memoir of a life lived in, through and for cinema. It's only fitting that she would end her story sitting on cans of film inside a beautiful shack made of 35mm strips from one of her "flops." Varda asks: "What is cinema? Light coming from somewhere captured by images more or less dark or colorful. In here, it feels like I live in cinema. Cinema is my home. I think I've always lived in it."

Forgetting is a form of freedom, but while we live, we always remember.
Posted by dizzydent at 4:43 PM