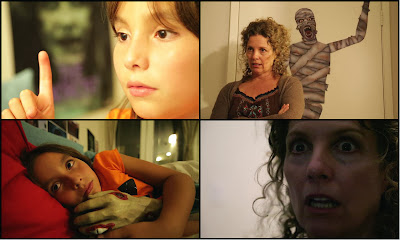 Last year I spent a fortune on my Halloween costume. This year, I decided to make a fun film paying homage to horror and Halloween instead.


Leave the Light On from Teri Carson on Vimeo.
Posted by dizzydent at 11:26 AM No comments: 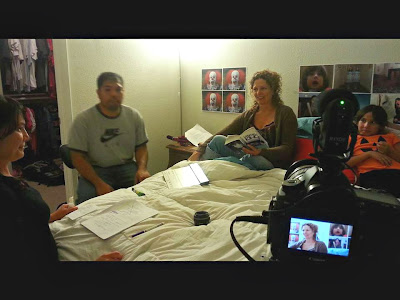 I just finished a 15 minute film in September but I decided I wanted to make another one ASAP.


Here’s a breakdown of how it went down:


I tweeted a joke and wrote a script based on the tweet.


Lighting package: A lamp with a bright bulb and no shade (pictured above).  The outdoors seen through the double glass doors were filled with the existing practicals and a set of purple and orange holiday lights. I decided I only wanted to light with practicals to see what the camera could do.  I wasn't disappointed.


Lenses:  2 primes and an L-series zoom.


Sound: Rode shotgun mic mounted on the camera because someone (me) forgot to buy an XLR adapter to attach to the boom.


The script was 4 pages and the shooting schedule was from 6 p.m. to 12:30 a.m.  There were no rehearsals and I decided to withhold the script from the nonprofessional child actor until an hour before the shoot to keep her performance fresh and authentic.  She surprised me when she learned her lines after going through the script only two times.  I let her change her lines so that they could roll off her tongue more easily.  The grown up role was played by a professional.


We didn’t actually start shooting until around 8:00 p.m. but we kept on going until 12:30 with no breaks.  It wasn’t intentional.  It just happened that way.  I was afraid the kid would get cranky and give me a hard time, but surprisingly the crew deflated and she kept on going.


Post production lasted two weeks but it was mostly me thinking and trying to make editing and sound decisions and taking long, long breaks. The total running time is 5 minutes.


From inception to realization, the film took a month.  I have never made a decision to shoot a film this fast.  Once you decide to go, you must go go go and don’t stop.  Make it work.


Happy Halloween!
Posted by dizzydent at 4:56 PM No comments: 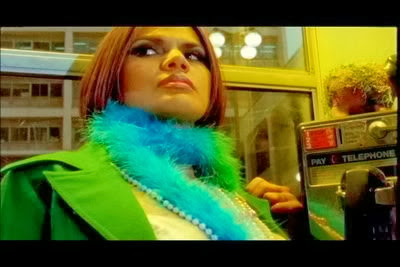 I started this blog as a production diary ten years ago on October 16:


I reluctantly begin this journal wondering why anyone would care. In the end, it should be good for something I suppose. Since wisdom is acquired from experience, i.e. falling on your face, then I hope to share that painfully acquired wisdom with other filmmakers.


I remembered only because this morning on NPR they mentioned the 10th anniversary of the fires.  I also remembered I was shooting a film back then.  I remembered I was fearless and very ambitious.  It was only my third film, but I shot with a large crew two super 16mm cameras, 6 actors and many locations all over San Diego.  Also, my shot list was heavy on dolly shots.  Oy vey.  I was audacious because I was stupid.  I didn’t know better even though I should have known better because while shooting my first film, a lot of things went wrong, including the worst thing that could happen.  My lead actress bailed on me the day of the shoot and I had to replace her with a friend of a friend.  My second film was an arduous shoot that amounted to nothing because I cast it wrong.  It was an expensive lesson.


In spite of all the previous difficulties and hardships, I made it worse on myself.  Throughout the shoot, I consoled myself by thinking, “This is my Fitzcarraldo.”  It really was.


As I am getting in my car, I notice there is ash on the ground. The sky looks dark and strange. What the fuck is going on? I arrive at the Civic Center and immediately take a light reading. I am one half stop under what I need. I look up. It is as if there was a giant silk diffusing the sky. I decide to shoot the bus stop and Conformist sequences with the 50D and push it a stop or two. Freddy and the rest of the guys arrive with the phone booth. That thing weighs a ton and it took a lot of effort to get it to the middle of the concourse. I am glad it’s them and not me. Poor guys. Neil has to leave the shoot as soon as he gets there. He is afraid his house would be on the fire’s path. He never comes back, but he calls us to tell us he’s okay.


We go off, guerilla style, into the street. The light changes constantly and it is annoying. We had a blast shooting the bus stop sequences. It was hilarious chasing Dulce down the street. We have to put up lights to shoot the Conformist shot. The Civic Center guards are very helpful and get us additional stingers. Ash starts to fall from the sky and allergies start to flare up. Since all of the characters appear on the last sequence, all of the actors are there. Genaro (make-up artist) asks me if he can make Israel look “prettier,” softer. I say go for it, but the ass and boobs are fine.


The ash gets worse. How can this be happening? San Diego on fire on the last day of my shoot. I will not quit or shut down. I can’t and I won’t. I will finish shooting this film today. I think that if the fire gets close to Hillcrest I will need to go home and get the film we already shot. I have my priorities straight.


I go off to get some water and when I get back I notice Natalia (DP) is crying. I see Freddy (AD) leave in a huff and sit down far away on a bench. I ask one of the grips what happened. He tells me. Major drama. I tell Freddy I cannot have the two people I need the most right now fighting. He is giving me a lot of stress. Laura (Producer) comes over and asks me why Natalia is crying. I cannot believe what is happening. Laura talks to Freddy, then Freddy goes off and talks to Natalia. They come back smiling. I guess they made up. I am surrounded by people, but I feel so alone.  So alone.


It takes forever to shoot the phone booth sequence. It is mostly dolly shots and I have to shoot them without a tripod. My body feels like a pretzel. I look over to our camp, and I see people are having lunch. Burritos from Baja Fresh. Luke is worried about his parents, since their house is on the fire’s path. I tell him to go home. I look at my shot list and storyboards. Nothing makes sense. People talk to me, I hear their voices, but I can’t understand what they are saying to me. Dulce asks me how I am doing. I am worried about her, her allergies, etc. She says she is fine. She has a great attitude. So different than the actor I had to deal with on a certain shitty film I directed that will never see the light of day.


Somehow, we finish shooting the end sequence. Freddy is supposed to take the phone booth back to Stu Segall, but it turns out the workers there are fighting the fire trying to keep it from getting to the studios, so he won’t be able to take it back today. We have three hours until we have to be at the Market Place. Lesley goes home to rest and Dulce, Genaro and Melissa go to my house to get ready for the next scene. I look for my burrito, but there isn’t one. I find a half-eaten burrito on a table and I eat it without shame.


I still have to get the props for the shopping basket at Albertson’s. I will have to cross the picket line. I can’t look the strikers on the eye. The people united, will never be defeated. Fuck it, the film always comes first. I try to pick cinematic vegetables and a baguette, of course. As I am leaving I apologize to the striking workers and I explain why I crossed the picket line. Their expressions say “we don’t give a shit and why are you telling us this?” The shoot at the market goes relatively smooth. I want a shot from inside the shopping cart, no way I will fit, so I put Natalia in there with the camera.


We are exhausted, faces black from the ash, eyes watering and noses running, but we finish one hour under budget.


Lesson: Never schedule to shoot the ending to your film on the last day.

During these past years, I’ve downsized in crew, budget and expectations.  Mostly because I want to keep making films regardless of my resources.  I’ve also become less delusional.  I don’t expect to get into any film festivals and my only hope for my films is that one person that isn’t family or friend sees it, likes it and gets it.


Agnes Varda said that if she had known anything about filmmaking, she would have never directed her first film.  I think that even if you know something about making films, nothing can prepare you for how hard it really is.  It’s not like child birth.  You don’t forget the pain.  It’s more like raising a puppy.  You never forget the challenges and eventually decide that the rewards are worth it.  You either quit or you keep on going because you have no other choice.  And that, as any director will tell you, is a sickness.


Lesson: Filmmaking is about more than about the finished product. It is about the time you had with your friends and colleagues creating the film.


P.S.  Poly Esther isn’t online because the only copy I have is on DVD.  As soon as I’m finished with Leave the Light On I will have it transferred and I will put it online.
Posted by dizzydent at 10:43 AM No comments: