Does the blank page terrify you or excite you?

I’ve been feeling quite despondent about my screenwriting lately.  Mainly because, although I’ve been thinking about 10+ ideas, I haven’t finished a first draft since March.  After years of trial and error, I thought I had my process down.  However, as of late, that process hasn’t been working for me.  So I moseyed on down to the WGA last night looking for some hope.  Or something. 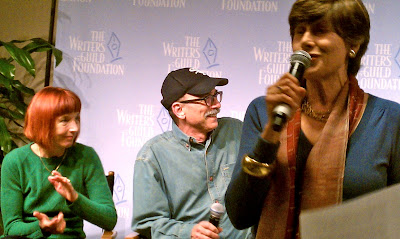 
Anderson explained that everyone’s brain works differently and that your process will be peculiar to your own odd mind. She’s visual, and therefore is terrified of the blank page; she finds it very, very daunting. She takes a long piece of paper, draws a long line, and starts to fill in the act breaks. She offered architect Frank Gehry’s process as inspiration. He crumples a piece of paper and sketches with it very liberally, then he starts to fill in more detail with charcoal, and so forth. That’s what she does with that long line. She feels that’s a good beginning so you don’t freak out. The main purpose of this is to get over you have a blank page in front of you; “It takes the kibosh of nothingness.” She added that she loves Syd Field.

Kazan never thinks in terms of acts. In fact, he gets very nervous when people start talking about acts. He just doesn’t get it. People break down his scripts for him all the time to show him the structure and he just thanks them. In contrast to Anderson, he loves the blank page; he finds it exciting, even if it’s terrifying at times. If he has a good sense of what the ending is going to be, he doesn’t want to know what happens before he writes it. He stars with what he calls a “stew.” A document where he writes down ideas for characters, dialogue, situations, etc.” (I do the same, but I called it the “dump.” I like stew better.) He’s written outlines, but very few times. He rarely knows what is going to happen in each section of the story, and, if he has an outline, he often throws it away. The organic process always forces you to throw away your plans.

Weiss, who writes with a partner, started out by declaring himself a studio “hack.” He said he didn’t have the freedom to be an artist like Kazan. He learned his structure from McGee, when he was Bob and not Robert. (He remembers his assistant peddling his seminars on campus.) His approach to story is very Aristotelian. He also draws a line, but his is curved. And his acts are not the same size like Andersons because “that’s crazy.” He spends about two weeks thinking about the premise and what the movie is really about, constantly asking himself, “What are we building to?” That goal has to be an emotional goal. 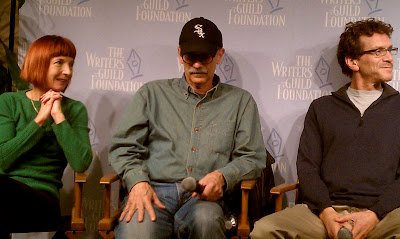 Anderson, who likes to talk in metaphors, said that even though all houses are different, they all need plumbing, electrical, etc. to function properly. That’s structure. You make the story your own with characters and tone. Anderson suggested we try titling sections of our story like they do for DVD chapters. She pretends her movie is already on DVD and titles each section in that manner.


Anderson likes to watch movies that are like the story she’s writing and she’s never been accused of stealing. Weiss talked about a preface to an Oscar Wilde anthology, where the editor mentioned that Wilde was often accused of stealing. The editor said that everyone stole because there was really nothing original. The question was really “Do you improve upon your theft and do you give thanks?” Those who call themselves original are the fakes. Weiss said that he was there to tell us to “Steal. Steal liberally.”

Petrie then asked when they start thinking about the low point. Anderson answered, that because she’s an optimist, she doesn’t like to think about it until she’s finished beating out the first act. Weiss said he thinks about immediately because that’s the emotional goal you’re building to. Petrie said Stephen Cannell called the low point (end of act II) “the destruction of the protagonist’s plan.”

Anderson then offered another metaphor: structure is like setting up buoys on the blank page. (Hmmm, no wonder I often feel like I’m drowning as I write. I neglected the buoys.) Kazan said that like him, some of us have an innate sense of what a story should be. He has a metabolic nervousness about boring people and he believes it’s also possible to discover structure as you go along. If he starts going too straight, the story becomes claustrophobic for him. He then brings in a character to shake things up and tries new things. Sometimes they work, and sometimes they don’t. He needs to feel the emotion in the movie. 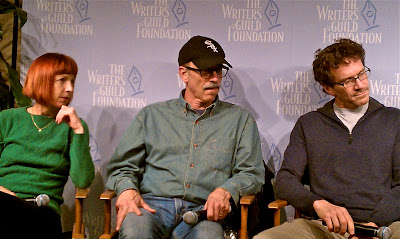 Anderson and Kazan stressed that all writers have to find their own approach through trial and error. Our job as dramatists is not to worry about hitting a paradigm but to make something exciting happen on the page. Anderson said that structure and an outline freed her up to be creative; she “needs a tightrope to dance on.” Weiss said that he had no choice but to be addicted to structure because he was a studio dog with deadlines and people to answer to. He doesn’t have the luxury of discovery. Anderson tried to comfort him by telling him he was being unfair to himself by calling himself a hack. Weiss laughed and said “I’m okay. I’m a well paid hack.”


Petrie asked them how much they throw away. Anderson and Weiss said not that much. Kazan said that because he doesn’t write as fast as he used to, he no longer ignore that distant bell that goes off that lets you know something is wrong. He has a “kitchen sink” problem; he throws things in and often it’s something he doesn’t need. A Brit producer told Petrie “Don’t over egg the custard.” You have to keep it simple, but don’t become a slave to structure because you have too much of it. Take a deep breath and explore your characters.

Weiss said a lot of times he has to be honest with execs and tells them “I don’t know but I’ll figure it out.” He needs to go back to his room and find out. Don’t try to fake answers. If you look inside you, the answer will come. Anderson added that every scene must be about what the character wants. As she writes, she asks it in the first person (What do I want?) and then the emotions inevitably bubble up and then the writing becomes more fun.

Petrie said that when he invited Kazan to be on the structure panel Kazan told him he should ask his wife (Robin Swicord). She’s even more fanatical about structure than Anderson and Weiss. She writes down what happens on every page before she sits down to write the screenplay. He hates it when she reads his scripts because she’s always saying “this is great, but it should be 7 pages earlier.” He replies, “Says who?” He’s not after perfection as no one should be. The movies he loves the most are flawed. We want to be surprised when we expect a reversal at minute 25 and then we don’t get it.

Bottom line: Each writer must device their own method to help her write. There’s the plan and then there’s the execution of the plan.


Weiss then shared the questions he asks himself in order to find his structure.

It must always be “life or death” for your genre, i.e. in a romantic comedy it’s getting the girl. We need to find the “caveman visceral want” for our protagonist.

One thing that Weiss does that I intend to start doing is writing down questions when I’m stuck or have writer’s block. Kazan joked that was a Talmudic approach. (Weiss is an Orthodox Jew and he wears a yarmulke.)

Anderson reiterated that we all need to figure out what process works best for our brain; what will keep our motors running. Sometimes it’s a nap. (I might try this one too.)

Someone asked about the midpoint. They all replied they are not mid-pointers so Petrie said for him something fundamentally different had to happen at the midpoint, and it was usually more than one mid point. Petrie the joked about some new structural approach they’re teaching at USC (something about dividing the screenplay into sequences). He said one time he accidentally hit that paradigm. Weiss said that there was a reason why Aristotle’s approach had lasted 4,000 years. We would have to wait if USC’s would measure up.

(Side note for those of you writing Mad Men scripts.

Jane Anderson writes for Mad Men and she revealed how they break the story in the room. Weiner comes in and tells them what characters he wants to focus on that week. Of course, since Don is the main character, they beat out his story line first. Then they move on to the next character, and then the next, etc. The assistant types up the beats and then cuts them into strips. Then they arrange and rearrange. I actually think is helpful for any one figuring out the structure of all the story lines of most one-hour specs.)

I must say going to these panels is helping me get over my current paralysis. I know what they’re saying. I’ve been through it. I just have to do it.

P.S. I hope some of you are getting something out of all of this because this is a lot of work!
Posted by dizzydent at 3:28 PM

Have I thanked you before? If I have I'm sure it wasn't enough. You're right, one knows but needs to know it again and again.
Have a nice evening with Danny.

Thank you for thanking me but it's not exactly thanks I want. Signs of life from others would be nice once in a while. Does it seem like I don't encourage commenting?

I know it's a lot of work to type out. It's much appreciated.