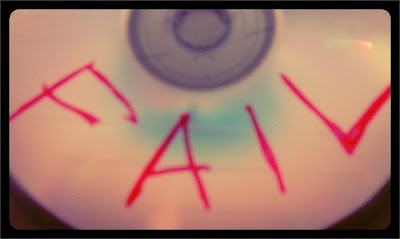 I finished the mix last night and decided I wasn’t going to touch the film for a while. So the edit stands until I come up with brilliant, artistic ideas to make it better. I’m coming down from creative euphoria and beginning to feel fatigue. If I let myself I’ll become exhausted, but I can’t. Not yet. I have to get the film out of my computer and into the world as soon as possible. I will try to do so by Friday night because I really want Sunday to be a day of lazy movie watching from the couch. And NOT my movie. I’m craving Bergman.


Because I wanted to test the film today on one of my work’s expensive flat screen televisions, I tried to author an HD DVD with DVD Pro last night. I’ve only used iDVD which is very easy to figure out. I had never opened DVD Pro and it was clear you really had to know what you were doing. I did not, of course I did not, but it didn’t stop me from going for it. Why not? It’s the theme of my life at this moment. I just messed around dragging and dropping until it worked. I went to bed and this morning I had a “success” message and the computer had spit out the burned DVD.

I then tried to play it and, after a few seconds, the film would just restart and stop in the same place, and so on. Oh well. I guess I’ll have to watch that handy instruction DVD that comes with FCP that tells you exactly how to do it right.

I haven’t submitted any films via Withoutabox in a while and was shocked to see how much their prices have gone up for the “power submitter” packages. It’s such bullshit. I’m not giving them and IMDB any of my money especially since my name didn’t come up when I was entering the crew’s information. Giancarlo’s and Sylvia’s did. I have several IMDB credits and I don’t understand why my name is not linking. This irks me to no end. I’m still stewing over a director friend of mine who added me to his project and somehow fucked up and gave me the “alternate name” of “Jose Perez.” That’s his name. I’ve tried many times to remove it and those fuckers won’t. Maybe I should just change my name to Jose Perez and THEN my name will pop up on WAB. I can imagine people looking at my page and wondering, “So, wait, she’s a tranny?” Fakkk.

Also, I didn’t bother to write a logline and a short synopsis before logging into WAB, so I had to write “blah blah blah” in the box in order to skip to the next category of information. I hate writing loglines and synopses. It really requires a lot of thinking that really doesn’t apply to the type of stories I tell. Or so I like to think. Being vague and misleading is annoying. Being literal is boring. Being provocative to stand out is hard. It’s difficult to strike the right balance and I hate to be put in that position. But it’s necessary. So that’s what I will be doing today. When I’m done procrastinating.

One of the things I did while procrastinating was to read the Sundance submission FAQ. Yes that’s how far I can go. I was planning on mailing my film on Monday thinking it was a postmark deadline. Wrong. It’s a “received by” deadline. I called the festival’s office to find out their office hours. Nine to five. That means I’ll have to drive all the way from Silverlake to Beverly Hills Monday morning before work. Wilshire Boulevard on a Monday morning. It’s not very indie of Sundance to have offices in Beverly Hills. They should be down the street from me. At least I live in LA and I can do that, but is my time worth it just to save $15? I have to ponder that a bit more.

OK, have to go clean the employee bathroom and then offer to get everyone’s lunch and then I will I sit down to write the goddamn logline and synopsis. But first, a muffin. Maybe a banana nut muffin…

I work on Wilshire. Yes, it will suck big ones. But totally worth it!!! Hooray!!!