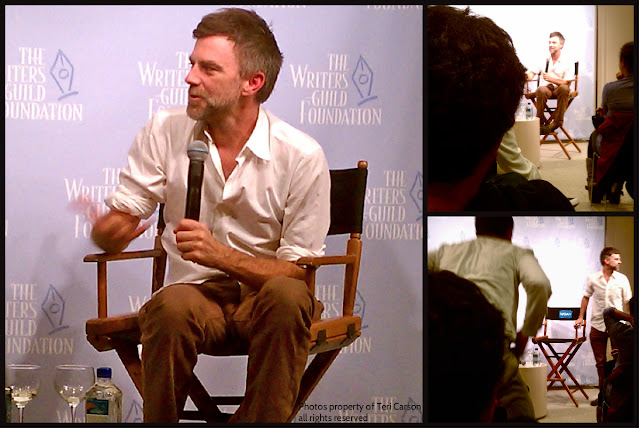 Last night I had the privilege to attend the Writers on Writing PT Anderson event at the WGA Foundation.  I almost didn’t go because I’ve been attending the AFI Fest for the past week and my dog has had it.  (Good thing I didn’t have kids or they would be whining to their shrink about how I wasn’t there for them because I was always watching movies.)  Also, it was raining and I was tired.  But my new thing is not to use being tired as a bullshit excuse not to do something because Woody Allen is right: "80 percent of success is just showing up."  So I hugged and kissed my dog, told her I’d make it up to her and off I went to learn from an American auteur.

F.X. Feeney moderated the discussion.  He’s that annoying guy at the movie line that goes on and on and on analyzing shit and doesn’t let the other person talk.  I think he did almost 50% of the talking and most of it was analyzing Barry from Punch Drunk Love.  PTA was a saint for actually listening to what Feeney was saying without letting his thoughts linger off into the repetitive mental chant “shut the fuck up shut the fuck up” like I did.

PTA said that he never takes into consideration story or plot. He gives everything he writes to his editor (Peter McNulty?) to read and he always throws back comments and notes that relate to classical screenwriting craft.  PTA goes off in a huff protesting, but when he thinks about it he realizes those elements fall into place to some extent out of instinct.  He hopes that the audience will come along in the journey because of the strength of the characters and not the plot or story.  He never considers theme.  He said that if he starts writing with a theme in mind that is the worst.  He feels himself writing and he doesn’t like that.  He said that because he doesn’t know how to construct a story, he simply dumps all his research and inspiration on a table and starts to play with it until the characters come alive.

He said that so much of writing is being humiliated by what you put on the page.  That made me laugh.  Sometimes I sit in front of my computer hesitant and ashamed before I open a particular document I know is shitty.  If he feels bored or stuck, he types someone else’s words, like a short story, to get him going and into that creative space.  He also writes short stories about each character.  Maybe someday I’ll try the first, but I already do the latter. He said when you’re starting out the pleasure comes from thinking you’ve written something great.  When you get older, the satisfaction comes from using your red pen to slash big chunks of text you realize you don’t need.  He gets high from it.

Feeney asked him to tell us how he got started in his career.  PTA said that the first thing that comes to mind was that at 17 he had made a mockumentary shot on cheap video called The Dirk Digler Story.  Then he thought he could develop it into a full feature.  He worked on it for nine years and it eventually became what we now know as Boogie Nights.  He said that’s how he taught himself to write.

He said that he learned very early on not to be precious about the writing.  He has had actor friends for a very long time and they told him actors only read he dialogue they have to memorize. He said, “If they don’t read it, why write it?”  Then he said something I’ve heard other top professional screenwriters say, “Screenwriting is not real writing.  Good writing belongs in books.”  When he gets on set, he fires the writer immediately so that the boss, the director, can take over.  And then if he needs to rewrite something the writer rejoices and is happy to write again.  He offered an example where the actor was right and the writer was wrong.  He wrote a full page of dialogue for a scene in The Master where Joaquin Phoenix’s character is on a walk and talk on his way to beat up a guy.  Phoenix kept asking him if he REALLY wanted him to say all that.  Phoenix hadn’t questioned anything about the screenplay until then and PTA took note.  He said they would do it with the dialogue and without.  And of course, Phoenix was right.

Someone asked him if he had ever considered writing for the theater.  PTA answered that he hadn’t because that seemed really hard.  Again, he said, “That’s real writing.  You have nowhere to hide.”  He was also asked to explain why his last three films were so difficult to understand.  Joking, PTA said he was getting confusing and obtuse?  He said with each film he was a different person and he was into different things.  He’s not the guy that made each of those films.  Feeney quoted Orson Welles: "One should make movies innocently — the way Adam and Eve named the animals, their first day in the garden…Learn from your own interior vision of things, as if there had never been a D.W.Griffith, or a [Sergei] Eisenstein, or a [John] Ford, or a [Jean] Renoir, or anybody." PTA agreed and he said, “I never want to go back. Fuck that. That would be horrible.”  At the present time he’s obsessed with Apichatpong Weerasethakul and wishes he could make a film like Uncle Boonmee Who Can Recall His Past Lives.  The thought of that audience of Hollywood screenwriting wannabes trying to watch that film makes me laugh.  Someone told him that Diablo Cody said she wished she had written Boogie Nights and asked him what films he wished he would have written.  He got excited at that question and kept on naming screenplays.  He said it would be a good drinking game or something.  He named Sweet Smell of Success, North by Northwest, The Treasure of the Sierra Madre, Network and Dr. Strangelove.

PTA’s thoughts and words really helped me at this point in my creative life.  I’ve been struggling with two screenplays, one of which will become my first feature film.  Certain scenes and parts of the stories are very clear to me, but there are gaping holes I haven’t been able to figure out yet.  PTA said that there are lots of places in his script where he just writes place holder action because he doesn’t know what he’s going to do.  He likes to leave things open so that he can do more with it.  He needs to leave room for the contributions from the actors and the camera.  For instance, in The Master, and I was happy he talked about this because I intended to ask him where the idea came from, he wrote “sailors at the beach,” and that was it.  He figured he’d think of something once they were shooting.  His production designer, Jack Fisk, brought with him vintage books with pictures of “sandies,” sculptures of women made of sand.  So the brilliant scene I wish I had thought of myself was actually a result of on-location collaboration. He said that “good writing is stealing.”

Perhaps the one thing that got me the deepest was in response to a question about his writing habits. He said that he was so busy that day, he hadn’t written at all and that he didn’t feel right.  It had been a good day but somehow he didn’t feel like himself.  He said even 15 minutes would have been enough to feel like himself.  For me, if I don’t write, I feel down and like a failure.  If I write, I feel like I’m a good person.  A better person. Not a total loser.

So, to misquote that very famous philosopher from a galaxy far far away, this was the inspiration I was looking for.  Now I feel okay with the fact that I may have to show up on a shooting day with no fucking idea of what I will do and the world is not going to end.  I can continue developing my stories and live with the fact that I may not be able to have it all on the page by the time production rolls in.  My collaborators will have my back and maybe they’ll come up with brilliant ideas I will steal and make my own.  It’s okay and it will be okay. That's part of the thrill of making a film.

“I made the statement years ago which is often quoted that 80 percent of life is showing up. People used to always say to me that they wanted to write a play, they wanted to write a movie, they wanted to write a novel, and the couple of people that did it were 80 percent of the way to having something happen. All the other people struck out without ever getting that pack. They couldn’t do it, that’s why they don’t accomplish a thing, they don’t do the thing, so once you do it, if you actually write your film script, or write your novel, you are more than half way towards something good happening. So that I was say my biggest life lesson that has worked. All others have failed me.” –Woody Allen

You can watch the interview here: https://www.wgfoundation.org/writing-resources/ I was told the price will come down, so wait.  I wasn't supposed to tell but you read this far so you earned it.
Posted by dizzydent at 2:55 PM

I love this Teri. It is great information to have. I feel the same when I don't write, yet I don't do it enough. I have to change that.

I also have to say that I admire your work and how you reveal those places in our psyches that we wish we could hide, yet feel better knowing that we share.

This goes deep. Thank you so much for sharing. It is invaluable. Liz