William Friedkin: Only questions, not answers.

There are more things in heaven and earth, Horatio, Than are dreamt of in your philosophy.--Hamlet, Act 1 Scene 5 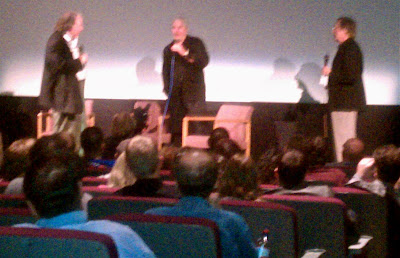 This past Saturday I had the great privilege of attending a screening of The French Connection and To Live and Die in L.A. as part of an American Cinematheque retrospective of William Friedkin’s films. I had seen both films before, but not on a big screen. As it happens always with true cinema, The French Connection was a revelation. Sometimes all you need to learn filmmaking is to see a film the way it should be seen. For instance, I had never noticed The French Connection’s astounding score and sound design and the way Friedkin used it as a story telling device. And even though I’ve seen it dozens of times, I was literally on the edge of my seat during the famous car chase scene. We saw a brand new print which is a cinephile’s wet dream.

It was also fascinating to see the two films back to back. Each film represents the decade in which it was made, from style, to acting to location. (Can you say Wang Chung score?) Both films have famous car chase scenes but it was almost as it they were made by a different person. To Live and Die in L.A. is one of the few films where you can see Willem Dafoe “act,” which I blame on Friedkin’s direction.

In between screenings Friedkin showed up for a talk back session and I’ve posted it for you in its entirety below. This is really good stuff folks. If you’re a fan of these films and/or Friedkin and if you’re a screenwriter and/or filmmaker, you will be doing yourself a great disservice by not watching these clips.

One thing is becoming very clear to me. I don’t need a Blu-ray player and an expensive big screen television as long as I live in Los Angeles. Nothing can ever replace watching cinema in a large room with a bunch of strangers.


Part :1 "Don't look for your movies at the cinemateque."


Friedkin talks about Billy Wilder and how The French Connection got made on a measly $1.8 million budget.


Part 2: About Ricky Bravo, his role in the Cuban Revolution, shooting in New York City and how the score came about.


Released as a double feature, the studio had no idea what they had.  Friedkin still thinks of it as a nice little B picture. A surprise guest shows up.

Part 4: Friedkin's actors talk about the kind of atmosphere he created on the set. Friedkin tells us what the director's responsibility is and lessons learned from Harold Pinter.

Part 5: Passing counterfeit bills and why Friedkin told the Department of the Treasury to "go fuck themselves."

Friedkin orders the audience to ask only intelligent questions. (Thank you Jesus!)  He also talks about the car chase scene, which was not in he script, came about, what you have to do to learn how to direct and what he tells film students. Also, a funny anecdote about Alfred Hitchcock.


Part 7:  "We don't make these films for brain surgeons."

A funny story about Lubitsch, Wilder and the preview process. He talks about the Confessions of St. Augustine and some shocking information about The Exorcist.

Email ThisBlogThis!Share to TwitterShare to FacebookShare to Pinterest
Labels: cinematheque, the french connection, to live and die in la, William Friedkin

That was awesome! Friedkin is a great speaker and story teller. I'm a big fan of Hitchcock and Billy Wilder so those stories were priceless to me. It was also really cool to see William Petersen up there.
Thanks for posting this,
Freddy

It was one of the best talk backs I've been to in LA. Petersen didn't even look like himself. Not even close to CSI years. Maybe it was the fat and crew cut. Can you believe the "possessed" was a NASA employee?