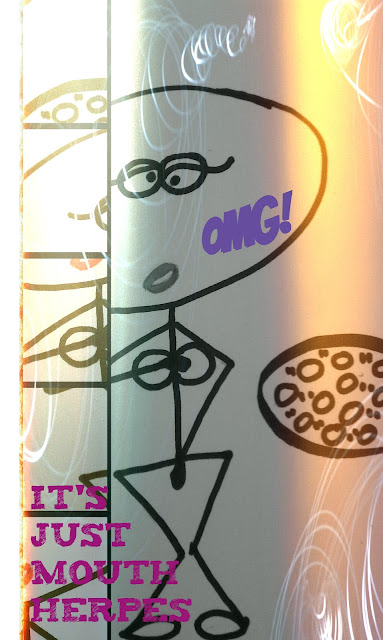 
Improv class was uneventful last night.  I behaved and never mentioned any of my race-related fixations.  We did a lot of exercises, which I will write about even at the risk of boring you because I want to chronicle my experience for future reference.


Again, we stared with Zip, Zap, Zop and the name game.  Then we got into miming.  But realistic miming, not like those annoying French mimes.  We threw and caught knives, babies and angry cats.


Next, a bunch of us had to act out tableaus on stage while the rest watched.  Someone would say, “Hey let’s go to the movies” we’d act it out and then someone would say “let’s go to the beach” and so forth.  Then someone had to pick a fight in slow-mo and the fight had to escalate into a brawl.  All in slow motion.  I learned that hitting and getting beaten up in slow motion is very tiring.


We also did a lot of space work, which rattles me because I have to pay attention to what others are doing and I can’t space out to think.  Which is good I guess because that’s the reason I’m taking the class.  Not to think so much all the time.  It’s a struggle, I won’t lie, and I hope I get better.  I’m baffled that I’ve had no trouble letting go and that I’m not afraid of acting like a fool.  I don’t even get nervous and, to be honest, it’s really out of character for me.  I didn’t think it was a big deal until a filmmaker friend who is also taking improv classes told me I was brave.  Me? Brave? I don’t think so.  It’s not like we have a choice at UCB.  You have to do it.  I feel like a new person and it’s very weird.


We did an exercise called How Can We Fuck with This Baby?  Again, the class was split in two, with half being the audience and half acting out the scene.  I didn’t get to do this one.  One by one, the students entered the room and added something to it and then they had to solve a problem using the baby.  One person took a shit and used the baby to wipe his ass.  You had to pick up the baby where it was last left, so you really had to pay attention.  Someone started exercising and picked up the baby and used it for step aerobics.  You get the picture.


For our group, he changed it up.  Now we were mute spies trying to hide top secret documents.  Same concept as fuck with the baby, but each spy had to retrieve the documents from the last hiding place and find another hiding place.  As soon as the documents were found, the audience hummed the theme to Mission Impossible and stopped humming as soon as that spy left the room.  I spaced out once, but luckily we could enter the room whenever we wanted to.  I chose to get a dog off his bed, place the documents on the bed, and then convince the dog to get back on the bed and lie on top of the documents.  I wasn’t interested in creating a piece of furniture or fixture because that’s fucking boring and I’m a terrible mime.  I simply pretended the invisible dog was my dog Pepa and did what I do every night when we are ready to go to bed.


Despite the teacher telling us not to try to be funny or wacky, people still did it.  He explained how and why UCB came about.  The founders were tired of the improv scene where everything goes for a laugh.  There was no direction and scenes always meandered from joke to joke.  So they got together and came up with UCB’s method.  I think the concept is basically just writing on the stage.  You start off and then you have to find the “game” which is what the scene is about.  The teacher explained that when a scene is working, you say something that’s boring, normal and logical to you, the audience laughs and you get surprised.  You don’t know why it’s funny until you analyze what just happened.  I had that experience with the Yes…And…exercise from last week.  So far, the two people I think are the best are not actors.  The actors act and try to be funny.  Us non-actors keep it in reality and try to live the scene.  However, I did notice that the one-liner is really ingrained in me now (because of my tweeting I’m sure) and that I spit them out without even thinking.


For instance, we played Know it All Expert.  You get in the middle and people ask you questions.  You’re supposed to answer them logically and with conviction even if you don’t know the answer.  Again, at the “top of your intelligence.”  Most people spewed out wacky, stupid responses to almost everything.  I did it once but I didn’t mean to.  Someone asked me, what’s the speed limit on the 405?  I answered 15mph.  It just came out.  Of course I know what the speed limit is but I’ve never been on that freeway at 65mph and it might as well be 15 mph.


We ended class with an exercise where two people were supposed to be doing something together, like washing a car, preparing a meal, gardening, etc.  The situation changed with every couple.  We were supposed to have a conversation while doing the actions but never mention what we were doing.  Pairing is usually random.  Teacher says “next two” and you go forward and whoever you get, you get.  I need to be more mindful of who gets up at the same time I do now that I know who I don’t want to do scenes with.  Yeah, I guess I’m directing by trying to cast my own scene but I get frustrated if I think I’m not getting the most out of an exercise.  I can’t work up to my potential if I’m always paired up with someone who doesn’t get it.


Anyway, so we got pizza-making at a restaurant.  You perform the action without speaking for a few seconds and then someone starts the conversation.  I said “Dude, I have something to tell you” first but my partner pretended he didn’t hear me, cut me off, hijacked the scene and said “So, when are you going to tell Joe you have herpes?”  It threw me off and I reacted like anyone would in that situation.  I said “Why don’t you say it louder so that everyone else can hear you?”  He replied “I’m just sayin’,” obviously because he had nothing to say, and I asked him “What is it to you anyway? It’s none of your fucking business.”  This is interesting because I was one of the few people to react like this during this exercise.  You’re supposed to call out people like you would in real life, but most of my classmates just go with it so the scene gets absurd really quickly.


The rest of the scene went on with him forcing the issue and me finally responding that I didn’t tell anyone when he had crabs.  I got frustrated and took it out on the imaginary dough and kept on punching it and punching it.  My partner never called me out on that because he wasn’t paying attention to what I was doing or feeling.  He then said I got the herpes from a girl and that I should tell my boyfriend.  I responded “It’s just mouth herpes, what’s the big deal?”  The audience laughed and the teacher stopped the scene.


I swear this type of selfish shit is making me hate some of my actor classmates.  I guess I have to let go of my directorial instinct when I’m performing, but I wish the teacher would mention generosity once in a while.  I mean, if you want it to be just about you, why don’t you fucking do stand-up or monologues?  And here I thought I was going to be the sucky one because I have no experience performing.  Not that I don’t suck, but I don’t suck that much.


Lesson #2:  Don’t space out.  Listening and paying attention is key in life and even more so during improv.


Bonus lesson: Casting is everything.

Posted by dizzydent at 3:21 PM