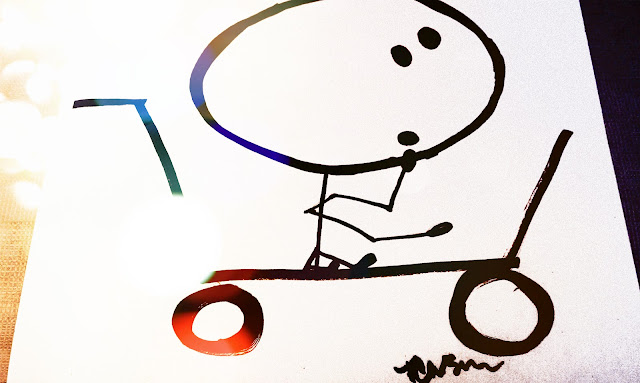 
Well, I stressed out and had nervous diarrhea over nothing.  Once I got to class all my nerves disappeared and I couldn’t wait to get on my feet.  After half an hour of administrative lecturing, i.e. The Rules and Regulations, we finally got to work.

The first exercise we did is called ZIP ZAP ZOP.  You say ZIP and point to someone in the circle and they say ZAP and point and so on.  It’s like verbal ping pong.  This was probably the hardest part of the whole night.  You really have to be coordinated and pay attention.  If you get distracted you lose track and interrupt the momentum.  We all sucked at it.  This was followed by a fun game to help us learn each other’s names and other loosening up exercises which really work.  I mean it.  If those exercises work on me, they work on anyone.  There were a couple of people that were self-conscious and, to my huge surprise, I wasn’t one of them.  I decided to make a fool out of myself from the get-go and I sure did.

To learn each other’s names, we were supposed to give ourselves a moniker, a physical attribute and act it out.  Leper Lisa walked like a zombie (I didn’t correct her because she was having fun doing that walk), Rappin’ Richie did a weird rapper thing with his hands, Jumpin’ Jenet, a duck-face blond with huge fake boobs spilling out from her low-cut camisole, jumped up in the air, etc.  And Scary Teri let out a frightening, ridiculous monster scream.  It got big laughs.  Probably not because it was funny, but because it was incredibly stupid.  I’ve never done anything like that in front of people I don’t know and it felt really good.  The teacher told me I redefined the exercise.  I think my self-consciousness left my body every time I let out that silly scream.

The first scene we worked on involved ranting about our pet peeves.  We took turns as a group of four and got up on stage.  As soon as the teacher pointed to a student, she would have to start her rant and not stop until the teacher pointed to someone else.  I could not believe the ease with which the words came out of my mouth.  I didn’t pause and I hardly took a breath. If you have known me a while, you must be shocked at this.  I’m not known as a talker.  In fact, I’ve been quite shy all my life and I don’t let people I don’t know see the real me.  I suspect this is going to end by the time I’m done with this class and I feel sorry for the people around me. I really do.


I guess you’re wondering what my pet peeve is.  I will try to recreate my rant (condensed of course) below:

I’m Mexican and I used to love my people until I moved to LA. Why? Because of the Laundromat.  I hate going to the Laundromat in LA.  It’s full of Mexicans and all of their family, friends, neighbors, kids and they do piles and piles and piles of laundry and it’s really hard to get a machine.  It makes me feel like a loser that I don’t own my own machines but worse, it makes me feel horrible about myself. That I have such horrible feelings towards immigrants.  And then I see they have the same blanket that I do that I bought at the Tijuana border crossing.  And then I try to grab a cart but they won’t let go because they think the carts belong to them.  And then I think, OH MY GOD AM I RACIST? I thought I was a good person and now this.  Going to the Laundromat makes me feel horrible horrible horrible!!! Etc.


If you know me, you know this is a very honest rant.  It had to be.  At least that’s what I understood the teacher meant by going off at the “top of your intelligence.”  He explained it didn’t mean expertise or trying to be smart.  It means that you’re supposed to use everything that’s inside you, like experience, feelings, and opinions.  What you know but that you may be afraid to express.  And that’s what I did and I wasn’t afraid.  Most people kept on repeating the same things in different words and ways because they ran out of material.  They tried to be wacky and quirky.  If, like the teacher said, you perform at the top of your intelligence, you’ll never run out of material.  So basically I’m doing the live extended version of what I do on Twitter.  Keep reading and find out how it didn’t end well.

Next, we did a second exercise where three of us, as a group, were supposed to be talk show guests and the teacher the host.  The rules were that we were all equals, shared a common experience and met in the same place.  One by one each scene descended in to the wacky and absurd.  I knew I really wanted to keep it in reality, but duck-face-boobs hijacked the scene and changed it.  All of a sudden we were on a cruise ship where closeted gays went to come out. HUH?  The captain wasn’t supposed to dock until every single person on that ship came out of the closet.  My character basically stayed in her room puking the whole time and when forced to come out of the room, she puked on duck-face-fake-boobs.

Wow, I thought, so this improv thing really is a fucking struggle between actors trying to outdo each other.  I won’t be casting  duck-face-fake-boobs in anything ever.  I think this is going to be my crux, because as a writer-director, I’m not vying for such attention.  My agenda is quite different.


I think I'm the only person that's approaching it from the perspective of mining truth and reality for comedy.  Most of the other students, especially the women, were trying too hard to be funny, weird, quirky, whatever.  They hijack the exercises.  It's not like when you can’t think of anything and go with something wacky.  The women in my class do it on purpose and it's super annoying.  So far, the men are more generous.


I did screw up royally but it taught me a lot about what improv shouldn’t be.

We concluded the night with the Yes, and… exercise.  It’s simple but hard to do.  Two people are having a conversation and one starts by making an observation.  Then you say “yes” and repeat what they said and add “and” and another observation.  Repeat.  Mine went something like this:


He: I notice there’s a new dent in the car.
Me: Yes, there’s a dent in the car and I’m sorry but I was hit by an Asian driver.
He:  Yes, you’re sorry and you were hit by an Asian driver and you didn’t get his insurance information.
Me:  Yes, I didn’t get his insurance information and so what, I forgot.
He:  Yes, You forgot and now I have to get a second job to pay for it.
Me:  Yes, you have to get a second job, and it’s okay because you’re my husband and you love me.
He: Yes, I’m your husband and I love you and --.

There was laughter after every line I delivered.  The teacher singled me out.  He told me I had used race a second time and that he didn’t want that to be my go-to thing.  That in this case race didn’t matter.

Of course he was right.  I was doing it wrong because I tried to steer the conversation my way before we even started the scene.  I tried to control the scene from the very beginning.  I wanted to write the scene my way as I’ve always done.  I’m used to being in control. Throughout the night, the only time I was in control was during my pet peeve rant.  I felt like shit.  Not just because of this failure, but because I looked up and there were 12 people, most of them white, looking at me and probably thinking I was a total racist.  When the teacher asked about the scene duck-face-fake-boobs said I came out as a cold, insensitive wife.  That didn’t really matter to me because I’m not interested in niceties.  I guess she would have played it that way.  I simply said what came to mind.  I guess it’s a good thing I’m not a wife.


I thought about this on the drive back and also most of today.  I took an ill-conceived risk and it didn’t pay off because I had never before experienced lack of control in creating a scene.  I’d like to say I’m fearless but that would be dishonest.  At this point I can’t say if I’ll become more guarded or not for fear of what people will think about me.  I just don’t know.  I’ve been so uncensored and carefree on Twitter and Facebook for so long that I don’t know how that is going to play out during this course.  I guess I just learned that Tweeting preposterous one-liners on the internet and acting them out in front of real people are two very different things.