This is going to be a really bitchy post.

I’m irritated. I’m fucking irritated. I’m really fucking irritated because I didn’t get enough sleep Tuesday night and I still haven’t recovered.  I have The Academy of Motion Pictures Arts and Sciences to thank for that.  I left my dog behind, sad and moping on the couch, and headed for the Samuel Goldwyn Theater for a special screening of the ten shorts nominated.  I was really looking forward to it, especially since Kenneth Branagh was hosting and conducting the talkback session. 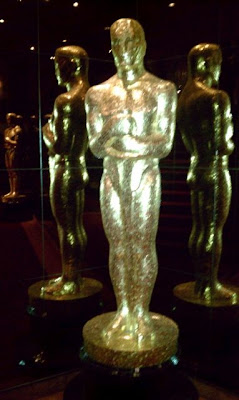 Yes, yes, yes. It’s true. For the most part, I don’t respect the Academy and what it stands for. I’ve blogged about it a few times. I only watch the Oscar telecast so I can bitch the next day about how awful and boring it was. The Academy Awards are a joke, a sham, a disgrace, a “humiliating institution.” Think Crash (Paul Haggis), the worst, most insulting, condescending, racist piece of shit winning and then think Stanley Kubrick never winning. Despite my feelings, I thought that somehow the short subject nominees would provide a somewhat redeeming perspective on the Academy’s shenanigans. I went to the screening expecting to see some of the best shorts the world has to offer and that I was a fool for such delusion is a gross understatement. It was one of the longest nights of my life.

First, Branagh introduced the animated films and he was very funny and charming. He did not disappoint. The first film was the 3D version of Day & Night; the Pixar short that played right before Toy Story 3. I had already seen it. Yes. Pixar. Cool. Pixar. Then I was put in a coma by the excruciatingly slow The Gruffalo; an adaptation of a best selling children’s book. According to the filmmakers, the dialogue was exactly the way it was in the book, which was obviously for 2 year olds “said the little brown mouse in the deep, dark wood” in Helena Bonham Carter's voice. The computer animation was just Meh. Next was a mildly amusing and well meaning piece of environmental propaganda called Let’s Pollute. It wasn’t entertaining enough to wake me up, but the audience seemed to like it a lot and their laughter kept me from sliding off my chair. I prayed to Le Cinema Gods that the next short would be better, and it was. The makers of The Lost Thing were successful in creating a unique world, but the story was thin and the voiceover overdone and mostly unnecessary. Although it fell short and it was underdeveloped, I enjoyed the artwork and the spirit behind Madagascar, A Journey Diary. It was one of the two shorts that had a unique point of view. For a filmmaker who did not speak English well, its creator Bastien Dubois was incredibly longwinded. Thankfully, Branagh shut him up and we were able to carry on and watch the live action shorts. (In retrospect, it would have been less boring to try to decipher Dubois’ English.)

I looked at my watch and saw that it was past 9:30 p.m. I again prayed to Le Cinema Gods that the next batch of films was bad or good enough to keep me entertained.  Then I pictured my poor doggie depressed on the couch and waiting for her momma to walk in the door.  I started to tap my foot and that’s not a good thing. 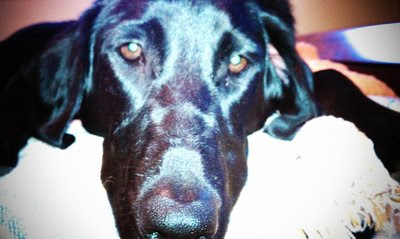 Praying has never worked out for me and this occasion was no exception. What came next was material that has been recycled ad nauseum: adorable, incorrigible children that swear while in cute scenarios, the textbook Tisch B&W set in New York City romcom (those film students still want to be Spike Lee or Martin Scorsese), the Africans in life or death situations and the terminally-ill protagonist who wants to lose his virginity as a last wish.

And I was hoping to see the next Kitchen Sink, The Antichrist, or Next Floor. Silly, stupid, idiotic me. It’s the fucking Academy and it’s fucking Hollywood and they peddle pablum.

You’re probably wondering how I know there are better, more original shorts out there. Because I’ve seen more engaging films in festivals and even online that’s how. A lot of them blow these nominees out of the creative water. Of course, most are not shot with fancy cameras, haven’t cost thousands of dollars and don’t have the backing of powerful showbiz players.

So…filmmakers…if you want to be nominated for an Oscar make a B&W film set in New York city and/or Africa. Here’s your logline:

Hilarity ensues after two incorrigible youths defeat evil Africans with machetes while battling cancer in order for one of them to lose his virginity before dying and for true love to conquer all.


After this awful experience, I fully expect The Social Network to lose everything.

Now I fully understand why Ingmar Bergman wrote this letter.  He sounds really irritated. More than I actually.  It’s probably because he was insulted to be nominated.  After seeing what the Academy considers to be the best shorts of the year, I’d be insulted too. 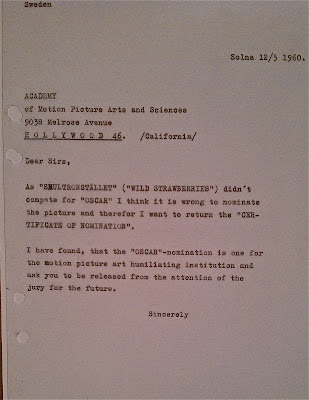 So yeah, fuck you AMPAS. Seriously.
NOTE: You can see a lot of photos from the AMPAS Bergman exhibit HERE.
Posted by dizzydent at 3:48 PM