I want to know you, but I'm a coward. 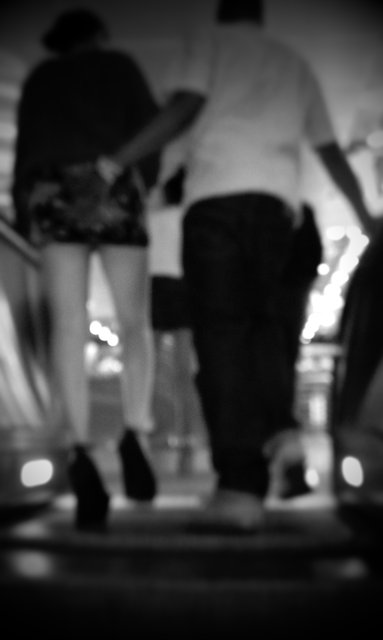 It happens once in a while.  I’ll spot a stranger and become enthralled with her appearance.  I’ll scrutinize every inch of every choice she has made that she's displaying on the outside.  I’ll imagine his life and write that script for him.  Then, I try to read her face—his eyes.  It’s never happiness I see.  They’re always blurry, dark and lurid images.  Old eyes wear exhaustion and young ones confusion.  “You’re confused now little girl but in a few years you’ll be exhausted ma’am.”  I never see hope.  I feel I’m staring at some degree of suffering dressed up in a unique armor.

This Saturday I decided to take the subway to the Egyptian Theater.  I didn’t want to deal with finding parking in Hollywood and, even worse, in my neighborhood at midnight.  It was a tough choice.  I hate the walk from the Highland station to the Egyptian.  I hate Hollywood Boulevard even though I  chuckle when I think of all the people who have never been there and think it’s a glamorous and exciting place.  It’s one of the worst places I’ve ever been to.  It’s tacky, ridiculous, sad and pathetic.

The guy in front of the Pig & Whistle holding the cardboard sign that says “A penny is okay” probably was convinced he was going to make it big as a screenwriter of tentpole action movies or, at the very least, showrunner of mediocre network television.  The girl holding the sign that says “$1 I want to go to the movies” doesn’t want to get a job so she’s peddling fake quirkiness instead.  The way I feel about them is in between pity and annoyance and I don’t like it.  I can’t be inside the theater soon enough.  It’s the safe place.  I can’t reconcile what is happening outside with what‘s about to happen inside this sanctuary.  Fassbinder.

After the films I rush to the subway station.  The boulevard is bustling with nighttime activities.  All the men look alike.  All the women look alike. Everyone behaves the same way. Disrespect permeates the atmosphere and I want to be below ground immediately.  I must have left my sense of humor with Fassbinder because the Mexicans showing off their parked, loud, sparkly, neon slick cars don’t make me laugh.  I’m just horrified these people actually exist.

Inside the train I begin to examine the faces one by one until the one-legged boy in crutches gets on at Hollywood and Vine.  His companion is a girl right out of a kibbutz, or rather, the kibbutzs I’ve seen represented in movies.  Her name might as well be Rachael.  A bandana holds back her frizzy curls.  She wears an oversize plaid shirt over a t-shirt, khakis and flip flops.  But I’m not really interested in her.  My eyes are on the one-legged boy.  He leans his shoulder against the pole.  They talk to each other for a bit but I’m not listening.  My eyes are on his pretty face and delicate hands holding the crutches.  He has tried to hide his mask with Caterpillar work boots, dirty blond, short dreadlocks spilling from under a brown trucker hat, an oversized, vintage black leather vest, a grey t-shirt, long shorts that are too big at the waist and that show off the white elastic of band of his underwear.  He knows his looks are delicate and has gone through a lot of effort to hide them.  He possesses both natural and manufactured masculinity; many strengths but one big weakness that has doomed him to a miserable life.  He catches me looking at him but he does not reciprocate with attitude.  He must have seen the interest in my face because he seems confused.  I look away and pretend I’m spacing out but I know he’s scrutinizing me now.  My instinct tells me that knowing someone like him leads to trouble but I still want to.

It’s always at this point of interest that I wish I had the balls to be a documentarian.  I don’t so I don’t talk to him or ask him questions.  That would be exposing myself and what’s in my head. I'm about to take out my phone to steal a picture but I imagine him beating me with his crutches.  I’m always concerned to seem exploitative. It’s a fine line and I don’t have the courage.  Regular people with real problems usually don’t give a shit about film and art. Bresson would have put her in a movie.

The train stops at Western and Hollywood and as he turns around to exit I see them.  Weird that I didn’t notice them when he walked in.  Well, that explains the ridiculous leather vest.  The breasts—young, round and bigger than mine.  I will never know what happened to her and how she lost her leg because I’ll never see her again.  All I can do is fabricate a character based on my memories of her.  She’ll never know that someone was genuinely interested in knowing about her life.

As always, when I ride the escalator up to meet up with the outside world again, I desperately try to find a moment to photograph to make up for the ones I missed.  I ride and think about the character I just encountered when my thoughts are interrupted by a continuous slapping sound.  I look up.  It’s a young man slapping his girl’s ass repeatedly.  I know she doesn’t like it but she does nothing to stop it.  It just won’t stop.  It's a long, awkward ride up.

I don’t want to know them.  I want to forget they exist.  The one-legged girl didn't ask to be damaged but this one is and it doesn't seem fair.

I take their picture stealing something from them and they will never know.  Serves them right.
Posted by dizzydent at 6:33 PM

Ok, but it's going to take a while since I hardly get out of the house.