Production Journal, Heartbreak in ? Cuts: On my ass, having a blast. 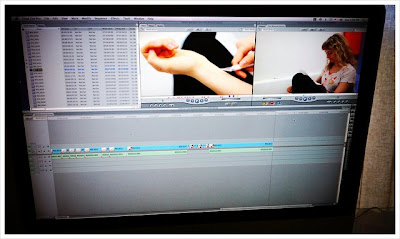 On my drive to work today a bizarre feeling took over me. At first I couldn’t even recognize it so I started to think about it while I just went with it. I feel like a chick flick cliché. I never would have imagined that in the span of only 5 weeks I’d be my most miserable and most happy. I didn’t even go on a soul-searching trip to Tuscany or fuck a hot guy. How does that happen? I asked myself if I should take the credit. Of course at first I was reluctant, but I couldn’t really give it to anyone else this time. I made a decision to work through pain and disappointment and the result is in me now. Whatever that is. OK. Fine. We’ll call it “happiness.” I know one thing for sure: it’s all in the doing.

Yesterday I spent 14 hours editing, on my ass, and I wouldn’t have stopped if it hadn’t been for the two times I had to pee and the other two I had to play with my dog who was miserable to be stuck indoors the whole day. I didn’t eat because I didn’t get hungry. That’s the way it is when you’re doing something you love. When you’re having a total blast.

How does a 4-page script turn into an 8-minute film (without credits)? You give it to me to shoot and edit. Now the real stressful work begins. I have to figure out what’s best for the film and to recognize where I’m being self-indulgent. I know I’ll have to kill quite a few babies to get the screen time down. Five years ago this wouldn’t have been an issue. I was more than okay with being idiosyncratic and I have the 17-minute film to prove it. I don’t have an editor next to me quoting Walter Murch every five minutes, trying to convince me why a sequence must die. This time is just me against me. Lordy.

For once, I really feel like da bomb and believe it’s true. I’ve surprised myself and right now I don’t know what to do with the emotions that come with it. I guess I’ll just go with it.

I’ll revel in my personal accomplishments, including conquering several paralyzing fears, until I have to do the titles on PhotoShop and my confidence is again shut down. Fuck you PhotoShop!