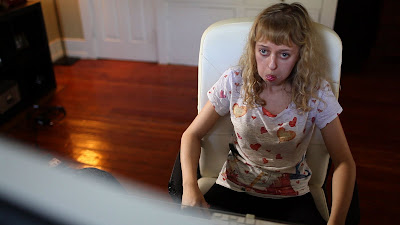 The last time I was interviewed for an article, the reporter ended up writing that I said Mexican films were crap and spelled my name "Terry Carlson." Apparently this is typical of the press. I didn't say that by the way and it was especially cringe-inducing to read since I'm Mexican and my film was a selection at the San Diego Latino Film Festival. Yeah, GULP. That they changed my name was really what bothered me the most.

I got interviewed over the phone yesterday and after hanging up I realized I blabbed and expected to read some abomination. I was relieved when I read the article this morning. I just need to clarify one thing:

I told the reporter that the best part about making this film was learning that I was capable of so much more in terms of the technical aspects of filmmaking. I was referring to post production. In the article the reporter writes:

...but it is her first attempt at taking on every technical role in the film making process and creating a short film completely on her own.

I was talking about editing, sound design, mix, titles, etc. I had a crew and I wouldn't have had such a great experience and results without them, especially my DP Giancarlo Ruiz. But I don't blame the reporter, I blabbed too much.

You can read the article below as well as other press the MCASD alt.pictureshows event is getting.

San Diego City Beat (Where Giancarlo gets a nice kudos.)

I’ve seen a few of them, and I can assure you that it’s worth stopping by the Global Wanderlust Station, where you can catch former San Diegan Teri Carson’s short, Heartbreak in 209 Cuts, a sharp little film about a girl dealing with the aftermath of a breakup. Technically speaking, it’s a comedy featuring some terrific cinematography from another local, Giancarlo Ruiz.

Here is KPBS film critic and cinema expert Beth Accomando's analysis of the works by Tijuana-based filmmakers (and friends) Cathy Alberich and Aaron Soto. I'm really looking forward to seeing them and their new work.

Museum-goers will be free to dip in and out of rooms at will to sample an offbeat cross-section of films linked either by a common theme, sensibility, or both in what promises to be an evening where “physical channel surfing” is encouraged.

I'm really excited to hang out but a little nervous that my dad is going. Last time I showed him one of my films he was catatonic throughout. And of course I hope my Mexican family doesn't show up with mariachis.

Email ThisBlogThis!Share to TwitterShare to FacebookShare to Pinterest
Labels: alt.pictureshows 2011, hearbreak in 209 cuts

It'll go as it has to: awesomely!