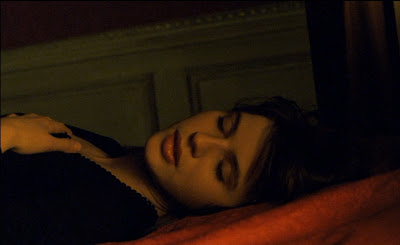 Celebrating New Year’s Eve comes very easily to some people. For others, it’s somewhat problematic. Earlier today I eavesdropped on conversations at a coffee shop. A couple was planning on going to a club and getting drunk out of their minds. Another had plans to order pizza and stay home with the baby. Easy. Some people don’t even know what they’re going to do until a few hours before and wind up scrambling to get reservations for dinner at the last minute. Problematic.

A week ago, I had plans to go out but I got lazy and planned to get out of it. I decided to stay home writing and watching movies and enjoying three days of retrospective “me time.” Then, I got word friends wanted to come down for the weekend. Change of plans. No big deal.

For me, going out on New Year’s has mostly been a let down. There’s plenty of evidence in this blog that reveals my hopelessly romantic nature, but in case you didn’t know, well now you know. I think New Year’s Eve is the day for lovers, not Valentine’s Day. Sure, it’s fun to party with your friends, but if you’re single against your wishes, the twang of loneliness is with you throughout the celebration and reaches its height after the countdown is over. You kiss your sister and/or best friend if you’re a female. If you’re drunk and male, you kiss whoever happens to cross your path at that moment. Yet, you smile. And pretend you’re having a great time.

My parents were party animals and naturally they loved New Year’s Eve; always flying off to either Las Vegas or Mexico City. (The old Las Vegas; before it was an amusement park.) They did the whole fancy dinner-show-dancing production. That was because of my mom. I think my dad would have been very happy just doing dinner but my mom was a dancer. He is not, but he was whipped and hopelessly in love and that’s the way they rolled. Before taking of, they would arrange for us to have a lovely evening. Us, as in my grandmother, the maid, my siblings, cousins and a couple of our friends. They would have dinner catered and provide plenty of Martinelli’s sparkling cider. I think it was the only time our fancy dining room table was ever set with the good china and crystal. My grandma loved setting that table, and so did I. It was fun to pretend to be grown up.

Years later, when I was old enough to go out, I still preferred spending that night with my grandmother. I’d rent a bunch of “my crazy foreign movies” as she called them, and watched them after we ate the duck and bunuelos. She’d get bored pretty fast and go to bed early. I stayed up until two or three watching romantic French movies. (Now that I think about it, now wonder I’m so screwed up. It’s the movies.)

But make no mistake. New Year’s Eve is about You and the Night and the Music. It doesn’t matter how great your plans are, if you’re single, December 31 sucks. I finally realized that 5 years ago when a girlfriend and I jetted off to Paris to ring in the New Year. What can be better than that, right? Because my friend took forever to get ready, we only had two hours to get to Les Champs Elysees for dinner. We couldn’t get a cab so we had to take the Metro. Clusterfuck doesn’t even begin to describe it. We managed to squeeze in the subway car and rode like horrified sardines. We emerged from the underground five minutes before midnight. We ran and joined a sea of people from all over the world at the boulevard just in time for the countdown. We hugged and kissed strangers and I pretended I was having a great time. After all, I was smack in the middle of my favorite place in the world. The most romantic city on earth. Suddenly, an Algerian in a bright yellow leather motorcycle suit tried to kiss me and my knee jerk reaction was to push him away. He got angry, got hold of me and gropped me while his friends laughed and the gendarmes watched. It was terrifying. I tried to get myself loose but couldn’t. The Algerian finally released me by giving me a forceful push. My evening was pretty much ruined.

My fantasies about New Year’s Eve and romance are very much influenced by music and the movies. I can’t help it. Reality is somewhat elusive when you’re a storyteller. Even more when you’re a hopeless romantic and all it takes is Frank Sinatra to get you on my feet dancing and singing. I just wish it wasn’t followed by a lump in the throat and a desire to weep at the hearing words “you’re nobody til someone loves you.”

Maybe some day I’ll get to celebrate New Year’s the way I’ve written it and visualized it in my mind. Maybe not. But until then, I’m staying home with my dog watching movies. Tonight it’s probably going to be some Kieslowski and Wong Kar Wai. Sigh.

Below you’ll find a sampling of songs I’ve been listening while writing this post. Enjoy.

Posted by dizzydent at 3:48 PM

This made me cry. You can't make me cry right at the beginning of 2011.
Buon Anno!