Stop thinking. Get out of your way. You will never be satisfied. 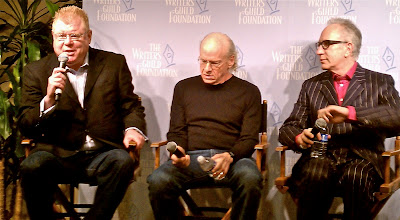 Notes on Craft: Characters
October 27, 2010
Guests: Howard Rodman, Richard Walter (dueling heads of USC and UCLA screenwriting programs) and an MIA Jennifer Salt (she never showed up)
So I’m two weeks late. The cold weather has made me a little lazy. And these things take forever to write. 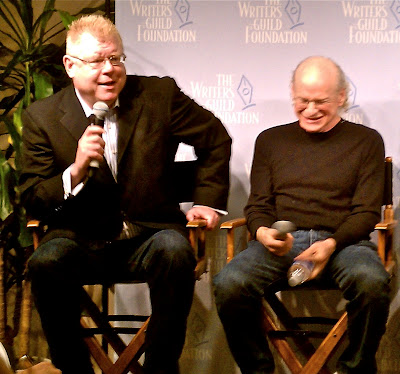 Dan Petrie began by mentioning that John August believes that, most of the time, the hero, the protagonist and the main character are the same person. If they aren’t, the hero is the character the audience roots for, the main character is the one the audience is mostly with, and the protagonist is the one that changes. He asked the guests if they agreed.
Walter said he mostly agreed, but that you have to root for all the characters, even the villains. Think of Judas. If Judas hadn’t done what he did, then there would have been no crucifixion and we would have no salvation. The audience must connect with the villain. All of the characters’ humanity must come across during the story. From now on, I’m going to start saying “Thank you Judas!” instead of “Thank you Jesus!”
Rodman disagrees with August. He said there's a misunderstanding in Hollywood as to what the audience needs. The insistence on heroes is bad for the movies. All the characters that made him want to write films were schmucks, not characters who change. Change is only sometimes useful. It’s a huge Hollywood hoax that the hero must change. Patton didn’t change, but he was a fascinating, flawed character and the audience is interested in seeing what he’s going to do next. Walter added that Steve McQueen usually turned down parts with arcs. He said: “I don’t want to be the guy who learns, I wan to be the guy who knows.”
Petrie then asked if we should start with character.
Rodman’s starting point is fear of the blank page, maybe also an image or a person but rarely premise and NEVER plot. He goes from poignant, to melancholy to regret to deep disappointment. But then again, the movies he writes are hard to write, hard to make and even harder to watch. He writes for himself and added that “Spec” is a horrible word. Do painters call their oeuvre “spec paintings” or “spec poems?” Petrie tried to comfort him by saying that it’s not that his films are hard to watch, they are hard to market.
Walter said it’s a big mistake for writers to break up premise, structure, character, theme, tone all the things that are involved in screenwriting separately. It’s less about construction than it is about discovery; the discovery of character. Hamlet is the richest character in drama and he is only described in three words: Prince of Denmark. The rest comes from what he says and does in the course of the play. Just you try to find a parenthetical in any of Shakespeare’s plays.
He recommended the book “Plots and Characters.” In it, Millard Kaufman explains that action defines character, not the other way around. Walter suggested we simply have the character act and figure out who he is. It’s a huge mistake to try to build a protagonist around the needs of a plot.
Rodman said screenplays that are not character-driven are not screenplays, but “charts.” You’re not really writing a screenplay until the character surprises you, when she does something you wish she hadn’t done and when the character is dictating to you. He admitted that when he’s writing on assignment he can’t see life beyond the page. The difference is that now he’s experienced enough to know he's writing dead crap.
Petrie, Walter, Rodman 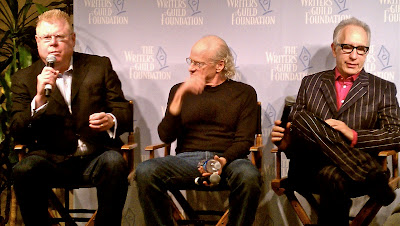 P.S. I think I fixed typos. One of them was calling McKee McGee. That's how much I care about his thoughts on screenwriting.
Posted by dizzydent at 4:35 PM

So many good thoughts to take away. Thank you, Teri!

Love your play-by-plays of these events. My non-snarky thanks for doing this, very philanthropist-esque (no that's not a dirty word.) I'm thinkin' there should be a national holiday in honor of you...'Dizzy Day?'

Mike and Matt, thank you. Traci, you betcha! It is a lot of work writing these up. I'm not gonna lie. But, whenever I leave these events, I can't wait to share what I learned with my fellow writers.

Thanks for posting. Hollywood has got to stop being so fixated with character arc, especially since most commercial films feature characters with zero complexity anyway, who experience superficial change right on cue, at all the expected moments after all the expected little conflicts.

Rodman was chair of the Writing Division at USC when I was there, and is still currently a professor. He's one of my favorites--as a writer, teacher and person. I wish I could've made it to this event.

Tell me about it. He's one of the classiest people I know. I have a mad crush on him. But shhhh! Don't tell.