The hilarious farce of AMPAS attempting to present Jean Luc Godard with an honorary Oscar has been a source of great amusement for me.  First, AMPAS reps insisted that Godard was appreciative and would be traveling to to accept his award in person.  Then, Godard’s friends denied it.  Eventually, AMPAS admitted defeat.  When I saw this photograph taken at the award dinner this weekend on my Facebook feed I busted up laughing.
Photo courtesy of Howard Rodman 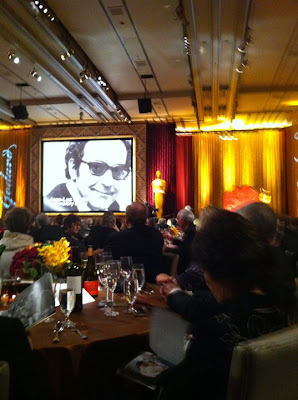 I knew Godard would never show up. I was really surprised when Godard sent a polite note (after hiding from them for days) to the Academy saying he would try to make it. I suppose he decided that would be the only way to get them off his back.

Imagine the guffaw I let out when I saw this letter from Ingmar Bergman at the AMPAS “Truth and Lies” exhibit last month. (Blog post forthcoming.) 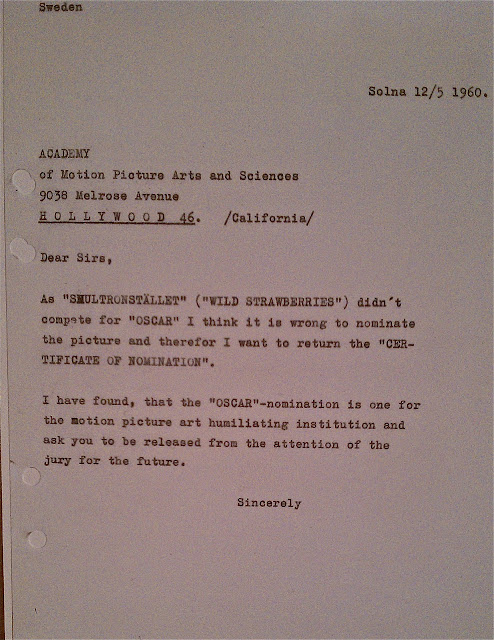 I told my friend James that Godard should have written a letter just like it and that I was surprised he was being so nice. James bet me Godard would pick up his award. Hey James, you owe me…what did we bet? I forgot.

Academy president Tom Sherak said of Godard at this weekend's Governors Awards, "I want you to know that this award is meaningful to him." Oh really? Check again. This is what Godard recently had to say to German ezine NZZ about the whole affair, which isn’t so polite, but very funny:


Q: Monsieur Godard, next Saturday, the Academy of Motion Picture Arts & Sciences will award you an Honorary Oscar for lifetime achievement. What does this mean to you?


JLG: Nothing. If the Academy likes to do it, let them do it. But I think it’s strange. I asked myself: Which of my films have they seen? Do they actually know my films? The award is called The Governor’s Award. Does this mean that Schwarzenegger gives me the award?


Q: Why don’t you attend the award ceremony?


And here’s an excerpt from Anne Thomson’s Indiewire column:


“At the start of the evening, the Academy governors who lauded Jean-Luc Godard clearly felt defensive doing so—reminding that the famously ornery Godard was not winning the Jean Hersholt Humanitarian Award. While Godard’s purported anti-Semitism was not mentioned, cinematographer Haskell Wexler, documentary filmmaker Lynn Littman, editor Mark Goldblatt, composer Charles Box, producer Mark Johnson and writer Phil Alden Robinson sang Godard’s praises. “This irreverent provocateur never used art to promote bigotry, a key distinction I had to understand so I could honor him tonight,” said Littman. “He dared us to misbehave as grown-ups and artists. He’s still misbehaving.”


But as clear as it was to me that they were right to honor Godard, the room felt cold as Black Swan‘s Vincent Cassel introed the Godard tribute, which included praise from Oliver Stone (“he gave us the gift of freedom in film; nothing was the same again”), D.A. Pennebaker, William Friedkin, Martin Scorsese, Mike Figgis and Steven Soderbergh, who added that Godard’s films were “funny.” Academy president Tom Sherak was forced to accept the award on Godard’s behalf, and kept insisting they had enjoyed a cordial correspondence. In fact, Godard’s longtime Swiss friend and producer Ruth Waldburger was asked and declined to come from Switzerland to pick up the prize. Which is why Sherak will be traveling to Switzerland to present it. After the high point of the evening, the Wallach tribute, it was all downhill.”


More on the night at:


Not even his friend showed up. Anyway, hopefully after Sherak flies to Switzerland and presents the award, they will leave Godard alone. And damn right his films are funny. And so is he. Very.

When Camus won the Nobel Prize for literature in 1957, Sartre was pissed. Royally so.

When, in 1964, Sartre finally got his own Nobel, he decided to one-up his confrère-in-existentialism by refusing to go to Stockholm to pick up the award.

Leave it to André Breton, representing an earlier era of French intellectual activism, to set Sartre straight. In a telegram, Breton wrote, "My dear Jean-Paul. The point is not to refuse the Nobel Prize. The point is to never have deserved it."