Accountability and Shame: The Divided Self 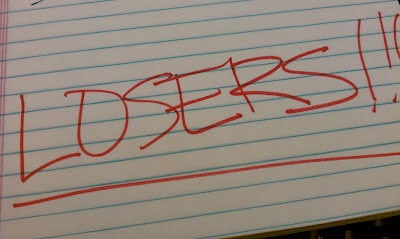 “Faust complained about having two souls in his breast, but I harbor a whole crowd of them and they quarrel. It is like being in a republic.” –Otto von Bismarck
Word on Success Street is that setting and reaching goals is important. Everyone is talking about it, especially writers, who seem to be notorious procrastinators. If you don’t set goals, you never get anywhere. It makes sense.

Earlier this year a screenwriter friend of mine (let’s call him James) and I decided to help each other set and reach goals. We’d email each other our goals for the month and then report on progress every week. I couldn’t even remember where I had written down the damn goals, but somehow he always remembered them and emailed them back to me verbatim. I couldn’t do the same for him. Yes, we were major failures in this endeavor. I certainly didn’t accomplish much other than generating countless screenplay ideas and making goal lists every week.

James sent me this article from the New Yorker on procrastination and concluded that our problem was setting goals that were too big. That we were delusional and did not have a very realistic idea of how much and how fast we could accomplish things (“the planning fallacy”). So we decided to try the small, concrete goal: X amount of pages at the end of the week. We decided to send each other 5 screenplay pages every Monday morning. We thought it was very doable and reasonable since we both have several projects in the works. We also decided that we did not have to read the pages, unless we requested it. I noted that it would be pathetic, on many levels, if we just kept sending each other the same five pages every week. Heh. Not. Our first goal was to be met this past Monday.

Once I have a beatsheet it doesn’t take me long to produce pages so I just waited for Saturday. After taking a look at my beatsheet and not being able to make some important decisions regarding a few characters (indecision is another problem of mine), I decided to wait for Sunday morning. On Sunday morning I decided it was justifiable to go see Let Me In since it’s a vampire movie and it can be construed as research since the screenplay I’m set on finishing by the end of the year is a vampire movie. When I got back from the movie I got on Facebook and saw that James was posting about the Charger game. I chimed in as well. Then, he emailed me asking me if we should move the deadline. I responded “Yes because I’m busy rewriting a screenplay I might send to an upcoming contest.” Yesterday he emailed me asking if we could move the deadline to Wednesday. I said let’s just turn in 10 pages next Monday then.

You see our conundrum. Fine accountability buddies we are. That’s why I’m posting this. To shame us publicly. We wear the red “P” with great shame and we deserve to be stoned.

The article I linked to above says procrastination is a basic human impulse and anxiety about it can be a serious problem. I’m beginning to suspect it’s taking its toll on me. I can hardly stand the internet these days and I feel strange and fatigued lately. I know it’s anxiety over not finishing anything. And to make matters worse I keep neglecting to schedule my yearly pap smear and mammogram. Not that I’m worried about my health. AFLAC pays me $200 a year for the screenings. Money should be a strong motivator but…

If indeed Thomas Schelling was right about the “divided self,” who is the Teri who makes plans and the Teri who fails to carry them out? He also proposes we “think of ourselves not as unified selves but as different beings, jostling, contending, and bargaining for control.” That sounds about right and I’m exhausted from the jostling. Yes, yes, yes, I admit that my YOUs have a big problem.

Every Monday I will post an account of our failure/success in connection with our weekly goal. I guess this is my version of Ulysses being bound to the mast of his ship. My hope is that with each post each confession of failure with turn into an account of accomplishment, not just for me but for James as well. I am determined to come out of it with a stronger, better will.
Posted by dizzydent at 4:36 PM

I loved that article on procrastination. (I am in fact procrastinating right now. I really ought to be shopping at Target, where Diet Coke is on sale three 6-packs for $9, but offering this unsolicited advice is more fun.) I think the problem you and your screenwriter friend are having is that you're always going to let each other off the hook. There's no penalty; no reward, either. Maybe the thing to do is have a bet: Say, the first one of you to get five pages in by Monday gets $100 from the slackier one.

Oh, definitely. He spent the last two days trying to convince me to let him off the hook. I didn't but I was tempted. Instead I made myself write, even though I didn't meet my goal. To tell you the truth, I don't even think losing money would be a great motivator. Thanks for reading and your advice. We are definitely shooting for progress, whatever it may be, every week.