Nothing frustrates me more than not being able to find stuff I want to buy. (I’m still trying to find the pink plaid beret Hedwig wore in the Laundromat scene.) Especially music. I’ve been looking for the soundtracks to Seijun Suzuki’s films for a long time with little luck. And the ones I’ve been able to find are overseas and retail for over $100. I check the internet periodically and never have much success, except for today. I found mp3s of the soundtrack to Branded to Kill (1967) and some other fantastic goodies too (I might share later). It made my year.

Branded is a product of the Japanese studio system, which seems to have been a lot like Hollywood; directors and actors were under contract to churn out movies at an incredible rate. It was Suzuki's last studio film, following a ten year period in which he averaged 3.5 movies a year (he directed 7 movies in 1963 alone!). After this movie Nikkatsu had enough of his radical (incomprehensible and unprofitable) movies and he was fired. I don't know if Branded was profitable or not, but it certainly takes more than one viewing to comprehend.

It's a yakuza film, starring chipmunk-cheeked legend Jo Shishido as a hit man named Hanada. Hanada, the Number Three Killer in the Japanese underworld, botches a murder and becomes involved with the mysterious and deadly woman who hired him to commit it. He then runs afoul of his employers, who send their Number One Killer to assassinate him. It’s a pretty generic crime plot, but it’s the bizarre details and style that make Branded interesting.

Branded is filled with people who replace their desire for one thing with something else, a.k.a. fetishists. Hanada has an obsession with the smell of freshly boiled rice, and is constantly demanding that people cook rice for him so he can smell it. Also, Hanada and his wife are fans of non-traditional sex. With a wife like that, you'd think he wouldn't stray, but he seems to find his wife even too crazy for him. So it's no surprise that when he meets a nice, normal girl named Misako, he falls hard for her. Romcom style, they meet cute: on his way home after killing six or seven people his car breaks down. She drives by in a convertible with the top down in the rain, and offers him a ride. As soon as Hanada notices her peculiar dashboard ornament—a dead bird with a spike driven through its neck—he’s smitten and can’t get her out of his mind. When Misako shows up offering him a job, he takes it. And let’s leave the synopsis at that.

Even though Suzuki's cinematic grammar is truly unique and sometimes bizarre, he does have his own set of rules. It takes multiple viewings to figure them out and it’s obvious he’s having a lot of fun with them. For example, he likes to rotate the camera around a subject in 90 degree increments when the characters anguished and uses non-diegetic sounds and shots that are unrelated to the action of a scene to convey subjective impressions. Most of his techniques work or make a loopy kind of sense, while some don’t. While Branded is not as well crafted or as suffused with an intoxicating loveliness as are some of his other films, it’s still quite memorable and evocative. When it’s good, it’s very good.

Suzuki engages us by drawing us into a strange, almost dreamlike world of terrible wrathfulness and crippling fear, and raises events above the mere shenanigans of nasty thugs and imbues them with a real epic quality. We’re transported to a peculiar, rarefied world of utter cruelty and terrible beauty, so separated from that of ordinary experience that we are further submerged in and entranced by the fear and the wrath manifested by the director's violent characters. Branded is an entertaining and captivating film. By the way, it’s all very funny too.

Damn, this post was just going to be about the soundtrack of Branded, but I’ve gotten carried away. Suzuki does that to me.

Anyway, the great Japanese composer Naozumi Yamamoto created many terrific jazz inspired scores for Suzuki’s films in the sixties and his work on Branded is some of his best. Enjoy. (You’re welcome.) 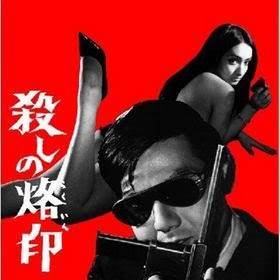 Posted by dizzydent at 3:28 PM

You ARE a goddammmm (4 m's exactly) genius!!