Toñita Runs Away at the Vail Film Festival 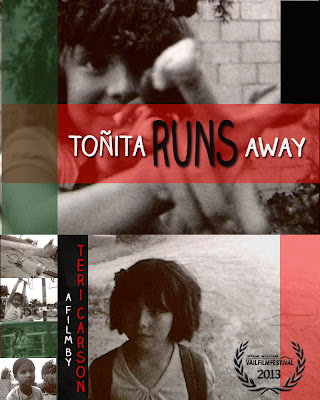 I think this is probably the last festival screening and then I will put online.  But if you happen to be in Vail... Unfortunately, I can't attend.  I normally don't submit to festivals I can't afford to attend, but the festival programmers contacted me because they saw my film when they were programming the Baja Film Festival and asked me if they could program it at Vail.  I'm bummed because it looks like a fun festival, but it also looks very ritzy and the filmmaker rate at the Four Seasons is $400.  Gulp. I really wish I could go.

Toñita Runs Away
Dir: Teri Carson 2012
After being scolded one too many times, mischievous Toñita runs away from home. While on the road, she meets another little girl and together they embark on a frolic through the Mexican countryside. On their way to the rodeo, their fun is interrupted by a gang of bullies and what looks like a covered corpse in the middle of the road.

Whitely Goes to Compton
Dir: Alen Aivazian, Reese Avanessian 2013
Logline: Whitey is a hip rapper who has to go to Compton with his best friend Sky to steal marijuana from a crack house, disguised as an orphanage, to make his crazy girlfriend happy.

Dismissed
Dir: Oren Hod 2012
Logline: After Zvi , an 80 year-old retired general, is being told he doesn't have much time left, he returns home to plan his next steps. An interaction with his son Amir make him re-think his plans.

Luminaris
Juan Pablo Zaramella
Logline: In a world controlled and timed by light, an ordinary man has a plan that could change the natural order of things.

If You’re Serious
Dir: Zhi Li 2012
Logline: (Yeah, they’re serious. This is their logline. The Chinese version is only five words. Probably.)

Close up on the young face with heavy make-up. Her name is MENGMENG, 17 years old. There are two men lying by her side. Wearing a worried frown and wry smile is the younger of the two, XU HUAN; the other man looks quiet and mature, who is much elder and named WANG DAZHI. After more than half an hour of lying down on the tracks, the train"۪s whistle finally comes closer and closer""_Mengmeng insists that they should never die in such an ugly way after she sees her stuffed bear """which fell when she was pulled of the tracks-be terribly deformed by the passing train. They try to come up with a new way to commit suicide.Mengmeng, Xu Huan, and Wang Dazhi know each other through an INTERNET SUICIDE GROUP, but none of them had seen each other before. Other than getting together to die, they decide and promise each other never to ask their own backgrounds or reasons for wanting to die. When they arrive in FENGHUANG, a charming little town, the three agree on a beautiful way of committing suicide---the next night, with sleeping pills, they would depart the world painlessly and silently on a rented boat over River Tuo.Once checked in a small hotel with her partners, Mengmeng decides to get out. She wanders the streets, but inadvertently sees Wang Dazhi getting in a bus leaving for Tongren and getting off when the bus is about to depart. Acting as weird as him, Xu Huan runs into Mengmeng when he carries several bags stepping out of a costume shop and doesn"۪t say a single word. Mengmeng is curious about them, but the only thing she can think about is her own grief and sadness. Afterwards she gets drunk and gradually falls asleep along the ancient city wall.Next morning, Wang Dazhi"۪s concern over the fact that she (Mengmeng) hasn"۪t returned all night surprises her, and her curiosity drives her to look for, step by step, the reason why Wang Dazhi wants to die. Later that day, she succeeds; but doesn"۪t say anything. The three walk quietly along the city wall, in contrast to the excited tourists passing by. Mengmeng suggests playing a game to get rid of the boredom. During the game, she tentatively tries to mention Wang Dazhi"۪s secrets, but only gets his alarmed eye contact as a response.During the second night in Fenghuang, Mengmeng dials a familiar number with Xu Huan"۪s cellphone and tells the boy on the other end of the line,that she is not going to the school anymore because she has to move to another city. She coolly finishes the phone call, but collapses after hanging up. Wang Dazhi and Xu Huan break into Mengmeng"۪s room after hearing her crying and the noise she made while throwing things around. Their appearance and concern accidently makes Mengmeng calm down, especially because of Xu Huan is wearing woman"۪s dress. She decides to do something for both of her suicide partners. The things the three of them do and talk about later that night subtly makes them, for the first time, feel very close to each other.Things start to go smoothly. Ready with the sleeping pills, beer, and wine, the trio finally get on board of the boat, happily and peacefully. In the colorful reflection of River Tuo, Mengmeng, Xu Huan, and Wang Dazhi, drink, joke, and smile groggily until falling asleep, with the hopes of a dream of their next life. While cleaning, the owner of the hotel room finds a lot of white pills inside the garbage can of Mengmeng's room.When Mengmeng wakes up next morning in the hospital, Xu Huan and Wang Dazhi have already left. The only thing that looks familiar around her is the stuffed bear that has been fixed. Before she walks out of the hospital, the doctor tells Mengmeng that she should never drink that much wine. After that day, Mengmeng never see the two men again. Also, no one knows who replaced those sleeping pills before they got onto the boat that night. It could have been any one of the three; but nobody asks anymore. related links

You can check out the full program HERE.

Posted by dizzydent at 7:48 PM