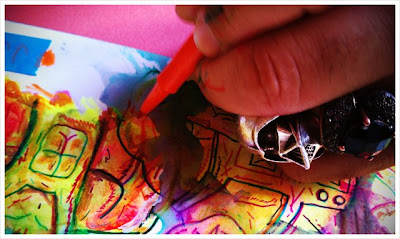 Yesterday I helped my friend shoot footage for his documentary “Comics Are Everywhere.” We spent the afternoon at artist JJ Villard’s apartment and filmed him while he worked on a piece for an upcoming solo show.

Spending time with fearless, young artists is always eye-opening and inspirational. JJ started working at his desk, but later moved to the floor and got comfortable on his stomach while he sipped on Pacifico. It was like watching a little kid get lost in his coloring book. He just drew and drew while we chatted. I remembered I used to be that little kid. I drew because I loved it; not because I thought it would bring success. JJ said when he was a little kid he’d run all over the house in search for a blank piece of paper to fill. He drew because he loved it and never gave the future much thought until 11th grade when his friends were applying to colleges and he had no idea what to do.

Artists covet the blank page; writers fear it. But why should it have to be this way?

I asked JJ at what point he got judgmental of his work. He said not until he was finished. I wished I felt that free. I judge every word and punctuation mark as soon as I put it down. (I’m not even going to think about what I do to myself while I’m directing.) Why can’t I just be like him? Really, why?

JJ started his drawing by putting down blotches of color and later filling in the detail with pen. And he wasn’t afraid to use white out when he needed it. He said he loved mistakes; that it makes the work more accessible to people because they can relate to it. That’s true. We can admire perfection but we can never relate to it.

I made a mental note of JJ’s technique and I’ve decided to use it and be more like him. From now on, I will write as if I’m drawing and I will sketch/write every day. I won’t aspire for perfection because it’s not even a good thing. I will just do it and not give the future a thought. 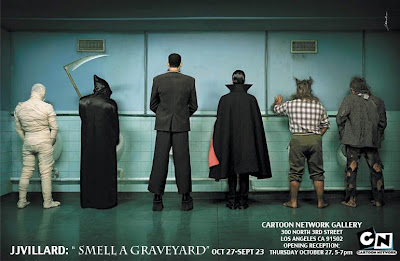 About time. You'll rock if you do.