During my run today I spotted a homeless man under the Sunset Junction bridge on Myra Street. Homeless people usually gather there because there’s a grassy hill where they can hang out and lounge.  It looks pretty comfortable.  From a distance I noticed that he was dressed for winter. He even wore a beanie. It was 90 degrees out there.  As I got closer I saw that he was writing on a notebook with a blue felt tip pen. He was taking it seriously and he didn’t look up at me. His loopy handwriting was steady; his thoughts were flowing with confidence. He knew what he wanted to write. I’ve never seen a homeless person write and I thought about him for the next four miles. 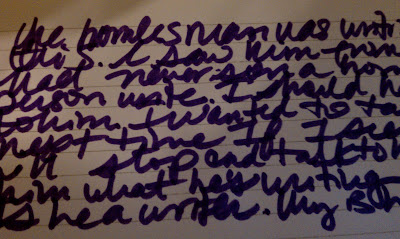 I notice homeless people a lot and I’m often intrigued with them. When I lived in Old San Juan in Puerto Rico there was an alcoholic musician that played Jazz at the main plaza across from the Pueblo supermarket. The first time I saw him he had a boom box and played along with his tenor sax.  I knew enough about Jazz to conclude he was really good. And he wasn’t just playing for charity money. He was really playing for himself and, perhaps, an imaginary Jazz-loving audience.  I wrote my first screenplay around him.  I imagined he was an American Jazz musician whose life went terribly wrong and ended up as a drunk in the Caribbean.  And there was this estranged daughter…and…well…the screenplay ended up in the Drawer.
A few days later my sister and I saw him playing on a different street.  His sax was gone. He played a small, plastic toy flute along with the music from his boom box.  We thought it was comic and tragic.  He had lost his instrument, but somehow he found the way to make music and it was still good!  We wondered where he got the toy flute.  The next time we saw him the boom box was gone.  The last time I saw him I was standing behind him at the checkout at the supermarket.  He was buying a bottle of Vino Perico (the Puerto Rican equivalent of Night Train) with coins. He was not carrying the toy instrument.  I thought about buying him a six-pack of Medalla beer and maybe having a chat with him, but I chickened out. 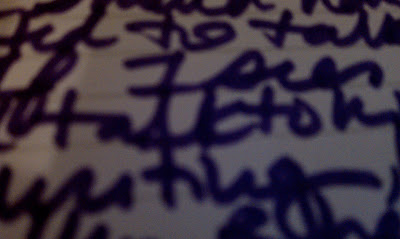 On my way back he was still there. Still writing.  I slowed down and got closer to him to get a good look at his writing.  He looked up at me. His chubby face was sunburn. He couldn’t be more than 30 years old.  He smiled at me. It wasn’t a crazy smile. It was a happy smile.  I thought maybe he was thankful I noticed him. That he wasn’t invisible to me.
I thought about him during my shower. I felt ashamed. I have a house, a great computer, internet—everything I could possibly need or want—and still I don’t write as often as I should. I waste a lot time being unproductive.  And here was this man who has nothing, sitting on a pissed-on, shitted-on and puked-on sidewalk, writing.
I wonder if he writes because he needs to or just because he wants to.  I will try to think about him whenever I make up an excuse not to write. I want to talk to him. If I see him again, I will. I want to know what and why he writes. 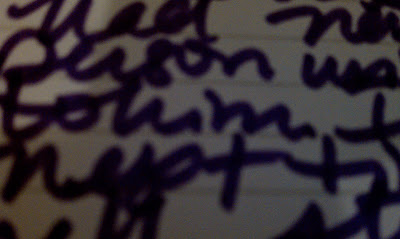 Email ThisBlogThis!Share to TwitterShare to FacebookShare to Pinterest
Labels: writing

The poetry of this blog is heart-wrenching.

I confess that anytime I see a homeless I feel a mix of feelings going from guilt (legacy of my catholic upbringing)to wonder and fear. I wonder what went wrong and fear it could happen to me or my children, anytime.

In London as the sun goes down, the entrances of the closed shops are covered with homeless seeking shelter from the freeze of the night. In my late teens, I was working the late shift in a patisserie in Piccadilly Circus and on the way to the bus stop I would see dozens of them, some couldn't have been older than me. Even then, I couldn't help thinking that their breaking away from society was the sign of our failure as a system.

Once on the tube a trump kept mumbling something, it sounded like a mantra, so I started to pay attention to his words and realized he was quoting Sigmund Freud. He might have failed for this kind of society, as most of us have really, but he hadn't been stripped of what he treasured most: his knowledge.